A Life Worth Living: Reflections on "The Gods Must Be Crazy" by Danny Giancioppo 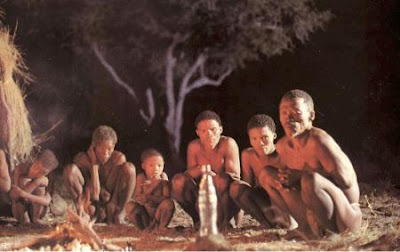 The sun peeked through the trees, and birds chirped softly against the whistling wind as the last of the long, August days came to a close. My chest rose and fell heavily, as my eyes slowly but surely fogged up with warm and stinging tears. My voice trembled, my hands shook, and I stared right at my best friend, feeling exactly the same way, as we attempted to find the words to say goodbye for the first time in our lives. We would see each other again, and talk on the phone almost every day, but we still knew that this was the end of a chapter in our lives. So, as I mustered the strength, I told him he was my best friend in life, I loved him like a brother, and I’d miss him, and he said the same; the beautiful sadness of course was that we felt such grief then due to equally positive, if not more powerful, experiences in our past. It was this ability to love one another, even simply as friends, that so much raw emotion could arise, as well as so much good being done for one another. Looking back, I realize that this is the case in so many other scenarios, not the least of which is Jamie Uys’s The Gods Must Be Crazy. Whether it was Steyn, Kate, Mpudi, or even just Xi with all living things, they provided irrefutable evidence in their words and actions that love is not only a driving force for goodness, but a powerful enemy to evil, and through its strength one can find a life truly worth living.


It’s almost too glaringly obvious to say that there are good guys and bad guys in this movie, but the more interesting fact to explore is the way in which the characters are depicted as members on polar ends of the spectrum. The Kalahari Bushmen are characterized as being “pretty, dainty, small and graceful” (Uys, 1:33). They know only peace and an unselfish love for most, if not all, living things around them. They allow time for conversation, leisurely activities, and even when they work, they do so both happily and cooperatively. Additionally, when the Coke bottle falls to the earth and disrupts this contented and fulfilling lifestyle, the Bushmen know enough, and more specifically love one another enough, to openly discuss their issues with this “evil thing” and decide to be rid of it. This purity they share, and the strength found within it, is more than enough to combat the nefarious Coke bottle, and achieve their goal of removing it from the earth. Alternatively, however, those without such kind-hearted emotions come to less than positive outcomes.


Sam Boga, arguably the most blatant and dangerous antagonist of the film, holds very little love in his heart, at least when viewed through the perspective of how he treats those around him. Whether it be those who he crosses paths with, the children he takes hostage, or even the very men working for him, Sam Boga is consistently unhappy, shouting and barking orders in an almost crazed sort of tone. His disregard for the lives of essentially everyone other than himself leads to his ultimate downfall. In fact, it is because of the love the other characters share for one another, even in a general sense, that they are able to outwit Sam Boga. Kate’s devotion to keeping her students safe as well as Steyn, Mpudi, and Xi’s need to save both Kate and the students and their general trust in and care for each other allows them to overcome the ferocity of Sam Boga and his criminal underlings. Even relationships that are not perfect, such as Steyn and Kate, for instance, can maintain a level of love which defeats the thought that isolation is key. I would know.


My car came to a puttering halt, and as I unbuckled, and turned to face my oldest friend, who had been my neighbor since birth, I felt my stomach doing flips and swirls the likes of which would make a roller coaster seem like a carousel. We stepped outside, the stars shining through a clear August sky, and despite the warmth the night still provided, I could feel a bitter chill with my every move. For the first time in our lives, he and I hugged and promised we would see each other again soon. I told him he was my brother; not that he was like a brother, but that he was my brother. I was always the more openly emotional of the two of us, so he didn’t say much, but from what he did and from what I could see, I knew the feeling was mutual. And as I rode back to my friend’s house, where we had left just minutes before, I felt the same kind of sweet sting I’d feel in departing my best friend weeks later.


My mom once said to me: “You’re so close with the other guys, you hardly ever fight, but you and [my oldest friend] always argue. How can you say you’re really that close?” (Giancioppo, 2016). I understood her trepidation, but as I’d always tell her, close friends don’t argue that much, but brothers always bother each other and they always get over it. We fought all our lives, and constantly had ups and downs; we had periods of time where we would not want to even see each other, let alone talk. Sometimes it was my fault, other times his, and some issues were more serious than others, but all the same, despite almost everyone claiming disbelief we would ever fix things, we always did. We loved each other, even with all the complications through the road we walked, because we walked through it together. We always made things better, and better was always good enough to keep an almost nineteen-year friendship going strong. Yet, despite better being just that, good enough, it seems that for society as a whole, it never can be. Instead, the world strives for perfection through cultural conformity, and in that search finds only reluctance, emptiness, a lack of love, and thusly, a lack of strength.


As Morgan Morrill explained in her own essay, “The Ironic Hospitality of the Kalahari Desert,” society, or rather the “industrialized world,” is going through a “happiness famine” (Morrill, Par. 5). She states that even smiles are few and far between in the modern world, whereas the Kalahari Bushmen are living a much more joyful, albeit simpler kind of life. Morrill goes on to provide statistics of the rising rate of diagnosed individuals suffering with depression in the United States alone, and she claims it’s highly due to the stress humanity puts upon itself to further society rather than their own necessities in life. With such a lack of empathy and such a focus on success and progress, we allow ourselves neither the time nor the love for what really matters in this world: each other. “No wonder some people go off the rails a bit” (Uys, 8:08).


Speaking of going off the rails, the rather disconnected members of society in Nicolas Roeg’s Walkabout share a strikingly similar mindset. Morrill suggests that not only the urbanized members of The Gods Must Be Crazy do, but that many of us in the real world do as well. The father of the two children, who is arguably the most far gone of any character in the film, has such a distinct lack of love for his children, it’s painfully obvious: inappropriate glances at his daughter, attempting to kill both her and his son, and then taking his own life, all within a matter of minutes! Alternatively, the hunter, brother, and sister all come to care quite deeply for each other. Through this devotion to one another, they are able to travel a great distance, learn a great deal, and survive the dangers of the outback, all while forming a strong bond, and even enjoying themselves throughout. To be certain, this idea of love---and with that, a lack of it---carries over in a number of scenes and only exemplifies the power it may hold in either direction.


Life can be hard, and there is no getting around that. It can feel so easily like it gives more than it takes, and it is much easier to just fall into autopilot and leave emotion out of the equation altogether just to get by. However, if you allow yourself to open your heart and see the virtue in true love---not just romantic but familial and platonic as well---the world and those within it may in turn open themselves up to you. Just as Xi, a leader of the Bushmen, does with all he comes across, we too can use the power of love to drive us toward a better, more fulfilling life. So far as I’m concerned, doing so in my own life has brought me more than I could ever have asked for; it has given me a life worth living, filled with people worth loving. Not only has it made me a stronger person, but more importantly, loving has made me a better person more than any kind of hate or ignorance ever could. After all, better may not be perfect, but it’s good enough, and good enough is better than a life without love to begin with. When you carry such strength, you may find that’s all you ever need things to be: good enough.

Morrill, Morgan. “The Ironic Hospitality of the Kalahari Desert.”

Posted by Taking Giant Steps Press at 8:14 AM