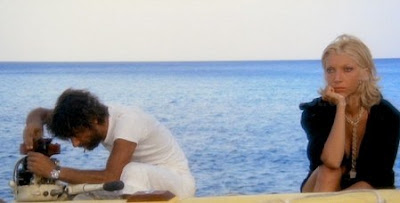 At the end of the day, women have caused every single problem known to man. Since the dawn of time, women have been the symbol for temptation and sin. Starting off with Eve tempting Adam and causing their expulsion from Paradise, women produce nothing but the downfall of mankind. In Lina Wertmüller’s film, Swept Away, the male protagonist blames the wealthy female, Rafaella, for everything wrong in his life. Serving as one of her personal waiters, Gennarino shoves her harsh insults into an overflowing bottle of fury. Stranded on an island with this catty spitfire of a woman, Gennarino finally lets loose all of his anger towards her. Giving her a piece of his mind, he explains why he despises her so: “When you were on the yacht like so many pigs lying in the sun with your tits hanging out... Like we were animals, not men. But I think you pigs knew. Every one of you pigs knew we were men not animals. You must have been very pleased turning us on so much that it was unbearable” (Wertmüller, 1:05:26-1:06:35). Gennarino’s sexual frustration is well deserved. To see a topless Rafaella and not be able to do anything about it can drive a man crazy, as it did in his case. A gorgeous woman such as herself taunts every man within viewing distance. However, “Gennarino hates the thing he’s attracted to” (Gordon).

Furthermore, stranded on a deserted isle with no means to get her usual coffee and caviar, Rafaella must find a new source of food. Gennarino, our male lead, easily catches fish after fish. He gloatingly eats his crab while the starving Rafaella watches. Proving his superiority over her and his worth, Gennarino captures the heart of Rafaella. During my first time watching the film, I could see the devotion and admiration Rafaella held for Gennarino. Being able to ensnare food—and Rafaella—through brute force, Gennarino encompasses the true stereotypical man. Masculinity at its finest is a bit on the sensitive side, and any threat must be immediately eliminated before masculinity becomes soft and weak. Despite constant beatings for her disobedience, “She becomes attracted to Gennarino’s abuse of power and begins to view it as a positive display of masculinity” (Farajollah, par. 5). For a woman such as herself, in an environment where she can do nothing but rely on the man to furnish the necessities, her instincts convince her to love Gennarino. Thus, she does, much to my contempt and desire for her to find her own way of providing for herself. Repugnance pumped through me as I watched the scene in which Rafaella begs Gennarino to “sodomize” her. In Roger Ebert’s review of the film he interprets her request as to telling the audience, “Woman is an essentially masochistic and submissive creature who likes nothing better than being swept off her feet by a strong and lustful male” (par. 5).

Before women can grow a sense to fight back, society teaches them how to surrender themselves to others. Every girl dreams of marriage and being tied down to someone. If she does not dream it up herself, then she is told to do so. In the words of Chimamanda Ngozi Adichie, “Because I am female, I am expected to aspire to marriage. I am expected to make my life choices, always keeping in mind that, marriage is the most important” (Adichie). Society mocks the women who do not marry. Kids will run up to her and yell “spinstress” while egging the scarily secluded woman’s house. The adults will ask her if she regrets not having any children. They will poke and prod her until she feels ashamed of not giving life to a woman’s purpose. The moment she was born, a woman has committed to offering up herself to the career of a happily married mother. Society has deemed it so, and Rafaella chose to let her eyes wander. Punishment must ensue. Gennarino makes sure of that, beating her for every sin she, or the rich, has enacted. 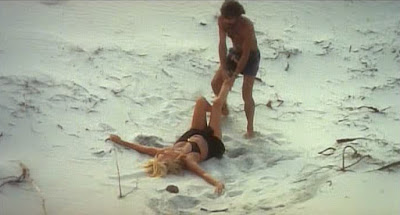 Moreover, brazen and combative women such as Rafaella must be tamed. She must fulfill her righteous duties in life. Not bearing children was her first mistake, and now she allowed Gennarino to catch her checking him out. Raising his fist towards her and raining down hell, he ensures she gets the message society has been screaming at her since the beginning: submit or suffer. Rafaella seemingly goes along with every one of his whims. Throughout the film she assures Gennarino of her love, going so far as to tell him, “I’ve never felt so good. I never want it to end. I love you” (Wertmüller, 1:26:00), when he suggests returning to the mainland. Needing proof that he is indeed manlier than her husband, Gennarino wants to chip away at Rafaella until she is nothing but his. In society’s eyes, the ultimate man would be able to do so without batting an eyelash. Proving his masculinity, Gennarino convinces her to go back to the mainland. Whilst there, we get to see the true nature of Rafaella.

Satisfyingly, Rafaella falls back into her old routine with her husband. When she throws Gennarino aside, I began to wander if she ever truly loved him. Being a romantic, I always want true love to prevail, yet I never got the sense that she had him in her heart. Moreover, I never felt her love towards her husband either, especially in the ending where she barely acknowledges him. When she glanced her husband’s way and then back at Gennarino’s longing stare for the last time, I realized she loves neither of them. The person she loves is herself. Her skill in surviving through any means necessary, including feigning devotion, emphasizes her self-love. In the scene right before she throws herself under Gennarino, she stares out at the waters, and in that moment I believe that she realized that she must fight back. As a woman, she does not need to prove masculinity or femininity. She must fight for herself. If she fights with her survival in mind, she can outsmart Gennarino and thrive on the island until she gets to the mainland. Wertmüller demonstrates the sophistication and decades long build-up of the feminist movement in Swept Away when she alludes to society’s viewing of women as their permanent scapegoat. Outsmarting mankind at their own game, women play into the submissive role while fighting to survive and thrive, just as Rafaella does with Gennarino. According to Roger Ebert, “She finds herself powerfully attracted to the situation; she's been spoiled so long, it's almost a relief to be ordered around” (par. 4), yet I would argue that she never truly does anything she has not convinced herself into doing. Everything she does is a rebellion against society and Gennarino. Wanting to remain in control, Rafaella implores Gennarino to sodomize her before he decides to do it himself. She goes above and beyond, and in doing so remains the one in control, mentally at least. Rafaella seduces not only Gennarino into believing that she truly loves him but the audience as well. Roger Ebert falls under her spell, dismissing her actions at the end as one of the mysterious things women just do sometimes (par. 8).

Adhering to the overarching theme, Rafaella’s case only goes to prove that when a man takes away a woman’s control and convinces her that she needs him in order to survive, then the woman will delude herself into having feelings for him. It helps that Gennarino is easy on the eyes. Rafaella was infatuated with Gennarino's aesthetic. Since the beginning, she was sexually charged for him. He was a forbidden fruit that she could not have because he was too dirty or too savage. Her sexual desire for him sparked a fire in her heart that she could not contain, especially when that fire was the only thing keeping her alive. In this sense, she saved herself by loving him. The fight or flight, freeze or fawn response is a normal human reaction to life-risking events. She used her instincts to her advantage. Her inborn intuition allowed her mind to fight on while her body feigned submission. Furthering the point, “Her mind was, in fact, merely colonized by the influence of Stockholm Syndrome” (Farajollah par. 4), which causes a captive to empathize with their captor in order to survive. Submission can give a captive the edge they need to last until rescue, which is something Rafaella takes advantage of. Without deluding him into the distraction of her body, Gennarino may have caught on to what she was doing. “She was smart enough to see the future and to think ahead, while Gennarino was stuck only seeing what was in front of him” (Gordon).

Throughout the film, Wertmüller brings forth examples of women resisting vassalage. From the opening scene of the film, Rafaella questioned society. She argued politics with the men and afterwards stayed up late to gamble while her husband slept. Embodying everything a woman should not be, Rafaella held true to her nature even in moments where the audience thought she gave up. Wertmüller, a fighter through and through, directs the movie through the lenses of the beguiled party. Movie reviewer Samantha Storms emphasized, “With this film, the negative light that is shed upon women such as Rafaella is not a symbol of inhibition, but an indication of forward movement and progression within a corrupted, subjugating culture” (par. 7). Societal expectations extort women into achieving nothing more than a person to be subjugated by the ambitious. Men are raised to be ambitious and to surmount anyone in the way of their success. Without eliminating these standards for each gender, there cannot be personal success and happiness for all. Wertmüller brings to light this aspect of our society through her film. She illustrates the battle between man and woman for dominance and equality respectively. The end goal for Rafaella is to survive in the wilderness and to be on or above the same playing field as men. 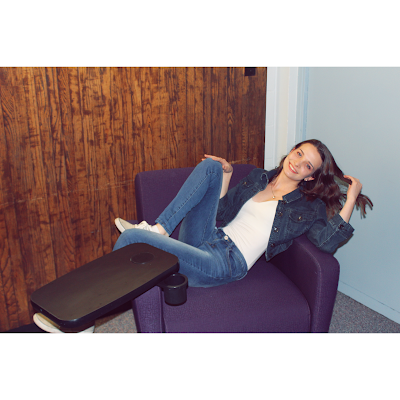 Ebert, Roger. Swept Away by an Unusual Destiny in the Blue Sea of August Movie
Review (1976) | Roger Ebert. RogerEbert.com.


“We Should All Be Feminists.” Performance by Chimamanda Ngozi Adichie, TedX,
TedTalks, Dec. 2012.

Posted by Taking Giant Steps Press at 6:09 AM