Artificial Nature: Civilized Man’s Downfall; A Look into “The Gods Must Be Crazy” by Ashley Orellana-Melendez

It is also rarer to find happiness in a man surrounded by the miracles of technology, than among people living in the desert of the jungle and who by the standards of our society would be considered destitute and out of touch.


In the eighteenth century, Britain gave birth to the Industrial Revolution and swept the world off its primitive feet. A wave of technology and innovative ideas began to flow all throughout Europe and shortly thereafter in America. Communities that were once rural and agrarian became industrial and urban. Over time, the culmination of inventions gave rise to a by-product we call the ‘civilized’ world. In this tech-savvy society, man sees no need to concern himself with the consequences of his creations or the footprint that he leaves behind, proving that the manufactured world is the epitome of “ignorance is bliss.” As humankind continues to progress towards technological expansion, it becomes less human-centered, putting the welfare of man on the back burner. In recent years, the masses have willingly paid this price in order to reap the “benefits” of modern-day commodities. This vicious cycle continues to run so long as our ‘stuff’ fulfills its purpose: making life easy while keeping us content. But in a society that seems to have lost touch with the natural, how do we know for certain that our happiness is true as opposed to distorted? And if our emotions are false, how can we claim that the Western way of life is superior to the lifestyles we have deemed primitive and savage?


Jamie Uys’ The Gods Must Be Crazy confronts us with these inquiries from the get-go by presenting us with a lifestyle that is opposite to our own. The film opens with a compilation of shots, introducing viewers to Sub-Saharan African wildlife. The camera shifts from gazelles to lions and from giraffes to elephants, all coexisting, to demonstrate that a certain degree of harmony does exists somewhere: in nature. The tranquility that is evoked by the scenic views is backed by an even more serene soundtrack, leaving viewers in awe of Mother Nature’s majestic creations. This peaceful opener invites us as the audience to let down our guards and embark on a blissful safari ride. As we continue to make our way through the Kalahari, we come across a group of “pretty, dainty, small, and graceful” (Uys, 00:01:17) people: the Bushmen. While we observe the primitive beings, a third-party narrator cuts in to enlighten us. In his Nat Geo Wild voice, the narrator says, “They must be the most contented people in the world. They have no crime, no punishment, no violence, no laws, no police, judges, rulers, or buses. They believe that the Gods put only good and useful things on the Earth for them to use. In this world of theirs nothing is evil” (Uys, 00:02:42). Taking note of the peace and overwhelming sense of joy that exists within this community, viewers are left feeling slightly jealous of the Bushmen. This insight is followed by a rundown of the tribe’s daily activities, to further educate the audience on the “savage” way of life. The elders dig for roots and tubers while the children gather berries. Some hunt for meat, while others makeshift tools out of the resources surrounding them. At the end of the day, they all come together to tell stories and play unorthodox games in order to pass the time. The Bushmen live a simple lifestyle, meeting the conditions of their gentle world. 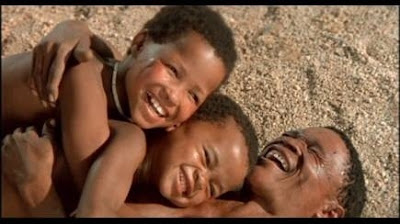 While this existence may seem lackluster and archaic to civilized man, it proves to be much more fulfilling and superior to the Western way of life. As Uys demonstrates in the first half of the opening scene, the Bushmen relish in their stress-free lives. They are not subservient to the constraints of societal pressures nor the construct of time. Instead of becoming a ‘snob-ciety,’ this group of people accepts what the natural world offers them. Thus, their only real worry is to gather enough food to feed their family. Since everyone, including the young and the elderly, pitches in, this hearty task becomes a leisurely family activity. In Western society, however, this task is overcomplicated and treated like a dire chore. Our ‘civilized’ world has proclaimed that man knows better than nature. So instead of doing like the Bushmen, we have created a culture in which one must possess stuff in order to survive. As a result, we put a tremendous amount of pressure on ourselves to get a well-paying job so that we can partake in acts such as purchasing genetically modified “food” or buying the latest iPhone. The self-manufactured dismay does not stop here though. Not only have we created a middleman to hinder us from fulfilling basic necessities such as alimenting ourselves, but along the way we have also constructed stressors and anxieties to warp our mental states. The Bushmen, on the other hand, have never been exposed to the manufactured world, so their physical and emotional health are better for it.


To further demonstrate the ways in which the norms of modern society affect our well-being, Uys juxtaposes the calm primitive lifestyle of indigenous peoples against the fast-paced world of technology. The audience is transported 600 miles south of the Kalahari, where the script is flipped and viewers are introduced to modern day civilization. The narration in this half of the opening scene satirically emphasizes the impracticality of our creations. In a condescending tone, the narrator says, “Civilized man refused to adapt himself to his environment, instead he adapted his environment to suit him. So, he built cities, roads, vehicles, machinery, and he put out power lines to run these labor-saving devices. But somehow he didn’t know when to stop. The more he improved his surroundings to make life easier, the more complicated he made it” (Uys, 00:06:00). This narration serves as a wake-up call for the audience. As Uys makes the point that we have created more problems for ourselves by trying to evade the natural, viewers are prompted to have an “aha” moment. It is here that we realize that there is a direct relationship between our commodities and our troubles: the more stuff we have, the more suffering we endure.

However, despite this fact, we cannot seem to stop making and obtaining manufactured goods. This inability to halt the innovation of unnecessary products is known as the Diderot Effect. It is brought about when one grows to need a particular kind of material possession: “Obtaining new stuff creates a spiral of consumption which leads one to acquire more new things. As a result, we end up buying and producing things that our previous selves never needed to feel happy or fulfilled” (Clear, par. 7). The Gods Must Be Crazy captures the essence of the Diderot Effect through a series of clips, showcasing a few of civilized man’s many inventions. Viewers become overwhelmed by the multitude of snippets---everything from speeding cars to skyscrapers and assembly lines to computers---in a manner that causes viewers to feel as though they are drowning in chaos. The splicing of these clips and the narrator’s tone are deliberately combined to show us that our current lifestyle is absurd.


In “#FirstWorldProblems: Looking at THE GODS MUST BE CRAZY,” Maggy Pollicino points out the faults of Western society. She declares our need for material ‘stuff’ as the foremost problem in our modern society. “When a thing appears, or is invented for convenience, after a couple of generations, people cannot fathom getting by without it… the excessive use of ‘stuff’ has become the true first world problem” (Pollicino, par. 3). However, in recent years this so-called “first world problem” is quickly turning into an epidemic. A study conducted by the United Nations Centre for Human Settlements estimates that by 2030 85% of the world’s population will be living in developed countries (“Urbanization: Facts and Figures,” par. 1). This means that in eleven years the vast majority of our population will live in manufactured societies. This statistic alone is cause for concern given our current state of affairs. Modern man is evidence that the more material goods one has at their disposal, the more out of touch one becomes. Our species is not yet emotionally intelligent enough to utilize technology without letting it pollute our soul. Emotional intelligence is described as the ability to be “more aware of our emotions and what they are signaling to us” (Handel, par. 9), meaning that emotions play a vital role in guiding our choices and decision-making. 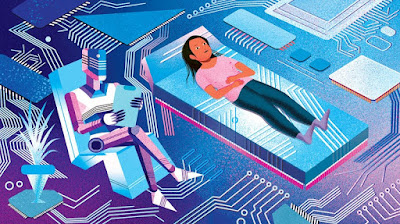 Unfortunately for us, we tend to confuse the rush of dopamine that we experience when using modern day technology with real joy. Dopamine is the neurotransmitter that is associated with the brain’s pleasure and reward system. This chemical brings about positive feelings based on certain actions (Fader, par. 6). In our ‘civilized’ society, actions such as tapping away on an app and or shopping online, have induced the release of dopamine. On the flip side, not partaking in acts like these can lead to a significant drop in one’s overall mood. In an article published by The New York Times, columnist David Brooks wrote, “Tech companies understand what causes dopamine surges in the brain and they lace their products with ‘hijacking techniques’ that lure us in and create compulsion loops” (par. 7). Evidently, we are not in control of our emotions; our ‘stuff’ is. Lacking the sense of emotional intelligence needed to uncloak false joy, we have allowed our society to get hooked on tech.


Uys subtly parallels this hijacking of emotions in The Gods Must Be Crazy. After a pilot chucks an infamous Coca-Cola bottle out of his plane, it lands in the wilderness of the Kalahari. Xi, a member of the Bushmen tribe, comes across the glorious bottle as he makes his way back home. Believing that the Gods had sent the bottle, Xi decides to take it to the village with him. Being resourceful people, the Bushmen find many uses for the bottle. One bushman uses the bottle to cure snakeskin while another plays music on it. “Every day they’d discover a new use for the thing… it was the most useful thing the Gods have ever given them, a real labor-saving device” (Uys, 00:09:56). All was well until man everyone suddenly needed it. Individuals began to take the bottle from each other and fights broke out over this piece of glass. The once peaceful and content people of the Kalahari were now violent beings, overcome with anger and jealousy. Just like advanced technology promotes fake happiness in modern man, the Coca-Cola bottle stirred up destructive sentiments in the Bushmen. Acknowledging this fact, Xi takes it upon himself to get rid of the bottle. He journeys to the end of the earth and throws the glass container away before it has the chance to further damage his family’s well-being.

The relationship between humans and manufactured products is toxic. Not only has our society come to depend on the artificial, but it has become obsessed. As a result, our souls are becoming rotten. However, it is important to note that technology itself is not evil. The ways in which we interact our ‘stuff,’ on the other hand, is evil. We must seek to become as filled with agency and emotional intelligence as Xi. In order to save our society from destruction, the civilized must learn from the “savage.” 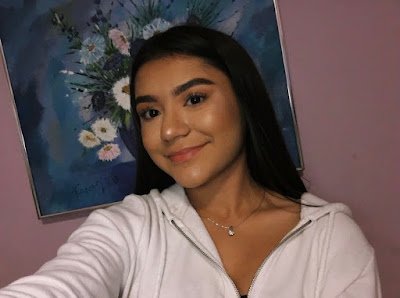 
Clear, James. “The Diderot Effect: Why We Want Things We Don’t Need — And What to Do About It”. Web.

Posted by Taking Giant Steps Press at 8:33 AM