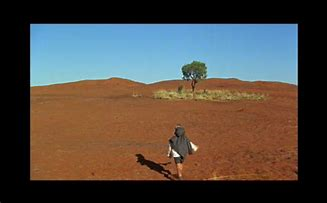 “There are those special movies that change your life after you’ve seen them. Then there are the almost miraculous movies that stay inside you and then change your life again every time you return to them” (Murphy, par. 1). As a biology major,  I found it extremely unsettling that there was more than one answer to the question at hand: What was this film really trying to tell us? The possibilities were endless and my brain was on the verge of short circuiting  trying to make sense of it all. I can lie and say that I had some spontaneous epiphany where all in the world made sense, but it didn’t happen like that. All of my interpretations were merely puzzle pieces until I took a step back and saw the bigger picture. I wasn’t wrong for believing acceptance and loss of innocence were part of the movie, because they were. What I was missing was perspective. With this newly acquired view, I saw that all of my interpretations were components of one big idea: Society is the monster lurking underneath our beds, and maybe, just maybe, we should be sleeping with one eye open.


My first impression after passing through the not-so-pearly gates of the maze was, “Am I missing something here?” The buzzing noises in the background and the constant switching of frames had me believing that it was going to morph into a horror movie before my eyes, or at the very least, something out of the Twilight Zone. The school children were sitting in straight rows listening to their mundane teacher while soldiers were marching through the streets. People’s faces were not shown for the majority of the opening scene; they were cut off at waist level. The children even appeared to be panting like dogs while in class leading me to believe that Roeg wanted us to see them as a herd of animals rather than individuals. At that point I understood that there was going to be a hint of societal mockery throughout the film. In hindsight, I know that this was one of the methods he used to get his point across. He needed to make us see that society strips each and every one of us of our integrity and individuality, leaving an exoskeleton of a human in its place. 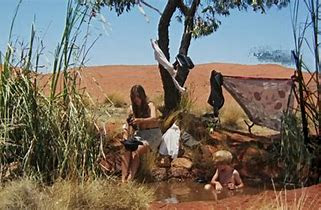 My first real interpretation was born when I noticed the sharp contrast between civilization and nature. One moment I saw a very structured society in which everything was in order, and the next moment a peaceful, empty desert appeared. When the father began shooting at his child and committed suicide, I assumed that he cracked under the pressure of work, a major component in civilization. When the aboriginal boy was hunting to survive, sport hunters came and left a trail of dead animals behind them. It was then that I made the connection. Director Nicholas Roeg wanted us to see that society is the root of all evil and destruction. In the city, everyone seemed liked miserable robots, but in nature, the tribe wandering the desert seemed to be extremely happy. People have been forcing themselves to act in a particular way for so long that they don’t even know the other option: freedom. Even after the girl and her brother escaped the desert, she still reminisced about the times she spent with the aboriginal boy. She longed to feel what it was like to be part of nature, because it’s where she was meant to be.


I thought I had it all figured out, but then I made the mistake of watching the movie again. This time, I came to the conclusion that this movie was about acceptance and the desire to mend the rift between two worlds. “After a time, these three youngsters cohere like a true family” (Muir, par. 4). The aboriginal boy was more than just a boy; he was playing the father figure of their pseudo-family. The first thing that came of the little brother’s mouth when he saw the aboriginal boy was “dad.” He hunted and cooked for them while they enjoyed themselves. He even took care of their wounds and offered to help them any chance he got. While the siblings were sleeping, he turned on their radio and listened to it for a while, almost as if it was an attempt to understand their language. The little brother even appeared to be painted in a tribal fashion when his sister was attempting to show the aboriginal boy that she wanted to go home. To parallel that, the aboriginal painted his face white while performing his mating dance. I don’t believe that he necessarily wanted to be white, just that he wanted to be part of the family. 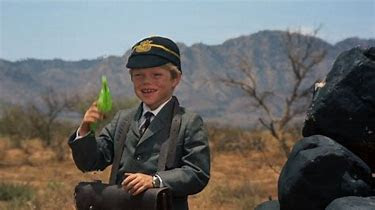 Good things come in threes, so of course I changed my mind again after our class discussions. This film was about the loss of innocence. The father shooting at them and committing suicide was shockingly not what initiated this process. Shortly after the siblings found the water hole in the middle of the desert, the little brother, bottle in hand, asked his sister, “Does drinking give you a big, red, fat nose?” (Roeg, 0:28).The screen quickly flashed back to an image of their father. If their father had been an alcoholic, odds are that they lost their innocence a long time ago. They could no longer live in their bubble of a world after experiencing as much as they had. It’s a misconception that the loss of innocence is a bad thing; sometimes it simply the acquirement of knowledge. During the time they spent in the desert, the siblings were exposed to tons of new experiences that they wouldn’t have had if their dad hadn’t gone berserk. They now knew that there are different worlds out there and ways of doing things other than those they’ve been brought up to know. Maybe they’ll even appreciate things a little bit more and see that a dirty uniform shouldn’t be a priority. Whatever the case, they are now more in touch with reality than they were before. As Roger Ebert put it, “… all of us are the captives of environment and programming: That there is a wide range of experiment and experience that remains forever invisible to us, because it falls in a spectrum we simply cannot see” (par. 6). 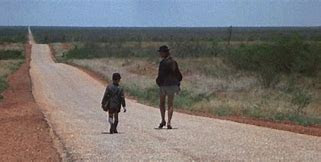 I am here to tell you that there is, in fact, a solution to this web of imagery that Roeg spun. I’m confident that this film was intended to foreshadow the dangers of brushing off the primal instincts lurking in the shadows of our learned behaviors. He’s not necessarily telling us to sell our houses, quit our jobs, drop out of school, and set up camp in the outback as tempting as that may seem at this point of freshman year. He’s trying to reach out to us and tell us not to live with our eyes wide shut. What are our motives for doing the things that we do? Is it because it’s what we really want or is it because it’s what someone told us we should do? The parallels between the civilized world and the desert are unavoidable. We can live out the rest of our lives bound and held captive by society, or we can be free. It’s as simple as that.