AN AFTERNOON IN GOWANUS by the Frank Perowsky Jazz Orchestra: A Review by Kirpal Gordon 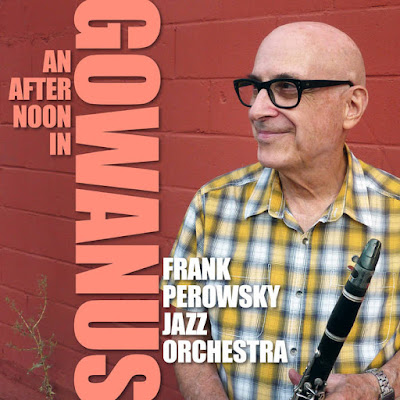 When Alan Watts, the self-proclaimed “scholar-entertainer” of Asian meditation philosophies, was asked what cultural institution of Western civilization most resembled the Veda-Buddha-Tao-Zen point of view, he said the symphony orchestra in which every member of the ensemble blends their individual voice/instrument into the group sound. Too bad Watts passed away before he could check An Afternoon in Gowanus by the Frank Perowsky Jazz Orchestra. Incorporating five saxes, four trombones, four trumpets and a rhythm section of bass-piano-drums, this big band of first call NYC musicians does supreme justice to Perowsky’s skillful, lively, bop-wild arrangements. His charts are full of intense athletic activity. His bandmates, many of whom have been playing with him for years, create a palatable force field of wow, a sonic atmosphere oceanic and deep, interconnected and layered, rich with improvisational opportunities, a joyful noise and a musical ride that spans galaxies. Per Watts’ eye to the relationship between Atman (the individual) and Brahman (the whole), this band achieves a collective sound which swings greater than the sum of its parts.


Recorded by Wei-Yu Hsien at ShapeShifterLabs in Brooklyn, a show I happened to catch live, the CD, thanks to Andy Taub’s mix and mastered by Roger Lian, gives a listener that you-are-there experience. It opens slyly with a quiet bluesy intro with David Berkman on piano, Aidan O’Donnel on bass and Ben Perowsky (Frank’s son and the CD’s producer) on drums. Then the entire band jumps, spirals, twists, leaps and dives headlong into Frank Perowsky's original tune, "Big Apple Circus." The madcap melody becomes a call-and-answer duet with each section of the band effortlessly switching parts. When the sections lay out, Loren Stillman solos on alto sax, smooth and sinewy, smoky and heaven-bound. Then the section players return accenting the solo and re-stating the theme. The overall effect, thanks to band’s precise pitch, is of having been launched into outer space.


On the second track, Bud Powell’s uptempo “Bouncin’ with Bud,” it’s clear the band has citizenship on other planets. From the stratosphere the trumpets announce the intro, Ben on the drum kit keeps it all together and Frank Perowsky’s unhurried tenor sax weaves and note-bends its way into a new reading of Powell’s bebop chestnut. Jacob Garchik’s trombone solo reaches to the skies and the band encourages his flights with blasts, smears, rumbles and riffs. The horn section takes an intriguing turn on their own before the whole band returns to the head. This ain’t no museum music. Like Mingus, Perowsky knows that the whole canon of jazz is alive and co-existing outside of time and labels.


The order of the tunes is particularly well chosen. Each track enlarges a listener’s sense of what the band can do. Perowsky’s mid-tempo “Sprang a Lang” opens with the horn section playing flutes, the blue mood growing electrifying as O’Donnel walks the bass and John Ellis solos pretty yet bad-assed on tenor sax before Brian Drye laws down the law and breaks it on trombone. On Tom McIntosh’s “Cup Bearers” Perowsky arranges the tune with so much imagination that contagion soon sets in. Berkman’s piano solo swings so hard and with such wit and Perowsky’s tenor solo is muscular and takin’ no prisoners. Once again, Ben on the drum kit adds the right flavors and kicks; the ending with the fluttering flutes is truly big band at its best.


A note of caution is in order before playing Perowsky’s tribute to the Basie band, “Down for the Count.” Vocalist Ira Hawkins is freaking unforgettable on this tune. If one measure of a song’s appeal is its return to consciousness while doing quotidian tasks (indeed, I cut myself shaving!), then be ready to hear Hawkins’ rich baritone voice all day long in one’s head: “When I first heard that music, it turned my whole life around, that swing, that style, the Basie sound.” Once again, the arrangement has the band bursting into joy; they comment, support, challenge and uplift the singer, the song and the other players. Word to your motha: they are not seeking to be Basie’s band; rather, they give thanks for what Basie did for big bands. Similarly, the band does not seek to out-Ellington the Duke on “Do Nothin’ Til You Hear from Me.” Rather, Perowsky’s unique arrangement causes a listener to hear this most famous tune in new ways. Antonie Drye wah-wahs away on his signifyin’ trumpet and Frank wails dervish-like on clarinet. The harmonies are lush and the blends are sublime.


John Lewis’ classic “Two Bass Hit” is also made new in this blast-a-thon version featuring Ben on drums, Bob Franceschini’s honking and growling “out” choruses on tenor sax and Chris Rogers reaching and preaching on trumpet. “Paris Dreams,” a beautifully arranged original tune by Perowsky, is the CD’s secret weapon brought into full manifestation by Sam Burtis’ amazing trombone solo. Larry Young’s tribute to Coltrane, “Talkin’ About JC,” gets quite the big band treatment. Trumpeter Waldron Ricks’ solo is bright moments abounding, and Roger Rosenberg reaches deep down into the lower register to showcase the baritone saxophone’s extraordinary appeal as a solo instrument. What an ending!


It is a rare delight to hear so much great music from so many great musicians who know how to blend, bend and send listeners to heavenly places. I’ve heard a lot of music from Frank Perowsky over the years, but An Afternoon in Gowanus is an outstanding example of his multiple skills as band leader, composer, arranger and player. Go to YouTube’s FPJO Birdland (https://www.youtube.com/watch?v=DxJ3ZmQVrKg) for a taste before purchase.

Posted by Taking Giant Steps Press at 6:22 AM