What Do You Do with Trash: A Review of WALKABOUT & THE GODS MUST BE CRAZY by Myrtchena Antoine

We live in a world where we’re always looking for answers. We’ve even made careers over finding out how the body works and how things in nature are made. Through Nicholas Roeg’s Walkabout, it is clear that many things are wrong in our broken society. But what this film lacks, although very impactful and eye-opening, is an answer to the question looming over our heads: If the ways of civil society are so bad, how do we fix it? Jamie Uys’ The Gods Must Be Crazy offers a solution to this unanswered question.


His answer is simple. Get rid of it. To put it bluntly, society’s way of running things is trash. And when you have trash you don’t keep it, you simply throw it away. In a highly sarcastic and humorous way, Uys shows the difference between the day-to-day busy society versus the peaceful and unified life of the “uncivilized” Bushmen. In the opening scenes, the typical ways of the Bushmen people are shown as the narrator vocally depicts what the viewers are seeing. He describes their world as gentle; it’s without punishment, evil, or even ownership. A few scenes later, there’s a shift in the narrator’s voice as the setting changes from the Kalahari Desert to civil society a couple of miles south. With a sarcastic and mocking tone, he explains the daily life of the civilized people. The narrator describes civilization as a world where one constantly has to adapt, readapt and dis-adapt. He says, “For instance, if the day is called Monday and the number 7-3-0 comes up, you have to dis-adapt yourself to your domestic surroundings and readapt yourself to a completely different environment” (Uys, 6:40). He goes on to describe the rest of the work schedule utilizing the same tone of mockery. Just a few minutes later, the scene shifts back to the Kalahari desert where a small plane is flying overhead. The pilot, who has just finished a bottle of Coca-Cola, decides to dispose of the bottle by dropping it out the window. The landing of the bottle into the land where the Bushmen inhabit is the viewer’s first glimpse of western civilization’s negative impact on the uncivilized. 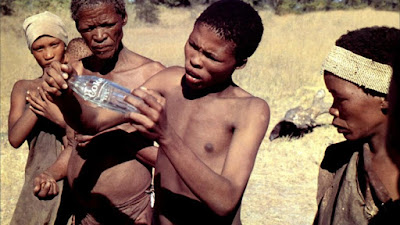 Nicholas Roeg’s Walkabout gives a harsher look on how western civilization destroys the lives of those living outside of that world and even those who live in it. The film’s main focus is two British children who are left stranded in the Australian Outback. Coming from a place where everything is done for them or can be done with a press of a button, the children find it difficult surviving in such an unfamiliar place. When they come across an Aboriginal boy on a walkabout, they immediately use him to their advantage. The Aboriginal becomes their hunter and guide, but when he finally returns them to civilization, they immediately order him around and behave ungraciously. There are also scenes of the boy’s people being put to work by white males and the slaughter of animals with high-powered rifles. All these events result in the boy taking his life, not wanting to live a life where he and his indigenous culture are used by others. 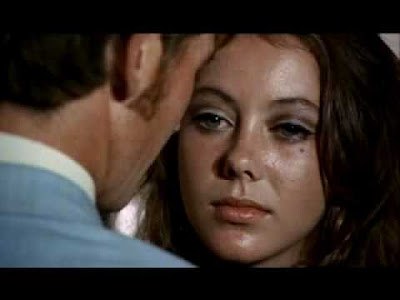 It may seem impossible that something so ordinary as a Coca-Cola bottle can represent something so vast and unique as civilized society, but Uys cleverly manages to do so. The Bushmen’s first encounter with the mysterious object was filled with confusion. They wondered why such an odd object was sent down to them. Not in the habit of wasting resources, they used the bottle to do many things. The narrator described it as a “real labor saving device,” a small way of showing the ways of western culture entering their lives. Civilization started out with just small things that made labor easier, then gradually grew into the highly technological industry that society is today. The Bushmen lived a life of peace where no one owned anything--everything was shared. But with the Coca-Cola bottle entering their life, the Bushmen started to change; everyone wanted to use it. “And now for the first time in their lives, here was a thing that could not be shared because there was only one of it [...] a thing they never needed before became a necessity” (Uys, 10:28). They now became jealous, angry, and violent with one another. Seeing that this object was making everyone unhappy, the Bushmen Xi made the decision to bury “The Evil Thing.” Somehow it came back in their lives, so Xi said that he’d travel to the end of the earth to finally get rid of it.

Finally we’re presented with a solution to the question: how do we fix society? Society was built on stealing, violence, hate, and many other elements. The solution to fixing this is by throwing away the way of life that we are so used to. The best way of mending this broken society would be by starting from scratch, but that’s inherently impossible. Instead it’s more plausible to rid of things one by one until eventually there is no more. Had the children in Walkabout thrown out their way of life and adapted to the situation they were in, then maybe the film would not have ended so tragically. Perhaps they would have coexisted with the Aborigine boy and his people and arguably have had a better life than the one they went back to. The Gods Must Be Crazy sheds a light on our damp society and gives the hope that Walkabout depicted as lost.


<http://megashare.sc/watch-the-gods-must-be-crazy-online-TVRjMw>.
Posted by Taking Giant Steps Press at 10:20 AM

Email ThisBlogThis!Share to TwitterShare to FacebookShare to Pinterest
Labels: adaptability, Bushmen, civilization, Kalahari, savagery, The Gods Must Be Crazy, Walkabout