Many Faces, One Heartbeat by Christian Scala 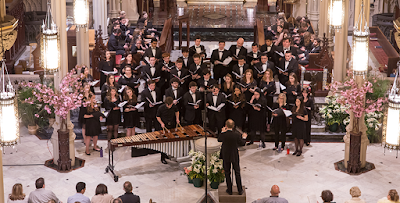 Throughout my time as a student, choir has always been my rock to cling to. Amidst my days filled with mind-numbing mandatory curriculars was always found a sanctuary in music. Though at first it was a place to relax throughout elementary and middle school, it would soon become a place of responsibility in high school when my interest would be recognized, as my teachers would encourage me to participate in extracurriculars. After participating in choir on both state and national levels, I assumed I had reached a peak in my career as a chorister. However, upon coming to Hofstra, I realized this assumption could not have been further from the truth. Hofstra’s choir programs have not only greatly improved my musical skill and given me a greater understanding of cooperation, but is a valuable activity for any student to take part in, regardless of major.

Though choir was always something I enjoyed, I had never fully conceptualized its significance until my participation in the New York All-State Music Festival 2017. The level of dedication to the music that I witnessed from the students I met was not something I had experienced before in high school choir class. Despite all of us being strangers to one another, we all worked with our bodies and our minds, toward the same goal -- to share something we all loved with an audience and with one another. We all disregarded any differences we may have had with the people surrounding us; we didn’t question how “talented” the people sitting next to us may be; we simply understood our duty to make music. While I was a “big shot” in the high school choir, I was humbled and inspired in All-State when I was faced with hundreds of other students who shared the passion I had, if only for one weekend. This unification and cooperation was facilitated by our choral director, Dr. David Fryling, whom I had previously met as a guest of his professional choir, eVoco, some months prior. I soon found out that he was also the choral director for the chorale and chamber choir at Hofstra University; however, being a junior in high school unsure of where my college search would lead me, I kept this information in my back pocket. Thankfully, it would not go to waste, but rather grow into something much larger than I had anticipated.

When I eventually did end up coming to Hofstra, my already positive expectations were exceeded. The level of focus I experienced in both chorale and chamber choir was greater than that of All-State and All-National, helped by the fact that we are all part of the same school, rather than strangers getting together for only one weekend. We all applied ourselves in ways that not only helped ourselves, but our classmates and conductor the same. This experience made me understand that in the world there is not a scarcity of compassion as many people would believe. As it turns out, scientific evidence suggests that I am not alone in my conclusion, as ArtistWorks’ “The Surprising Health Benefits of Singing in a Choir" states:
Another notion is that the experience of making music together provides a sense of awe not just for the observers, but for the participants, as well… What does that awe lead to? Research shows that this emotion engenders an enhanced sense of altruism. It seems to shift our focus from our own narrow view to that of our common humanity. Those who report more awe in their lives have been shown to be more generous, more ethical, and more helpful towards others. Perhaps as we join with others to create an experience of great beauty, we diminish any sense of scarcity, while augmenting our connection to all in a way which is paradoxically self-affirming. We feel more comfortable and happier in our own skin.
It is because of this feeling of human connection found in a choir that I have found a greater desire to be social, seek friendships, and help others in my life, in spite of shyness I have dealt with throughout my life.

Aside from the social aspects, choral singing has many other health benefits. According to research done at the University of Gothenburg, “Researchers discovered that members of a choir saw their heart rates beat in unison in relation to the speed of their breathing. Heart rates were directly affected by the melody of the music, and the pulses of those tested rose and fell at the same time when they sung in a group” (Smith). This regulation of the heartbeat is good for the body, as it keeps the singer relaxed and reduces the effects of anxiety and depression. It is also suggested that the “deeper breathing associated with singing… is also used in meditation,” strengthening the association between singing and reduced anxiety (“The Surprising”).

Although these benefits are wonderful, the most valuable thing I have learned from my participation in the Hofstra choir is how it functions as a microcosm for a functional group. In a choir, everyone must work for the same goal while not sacrificing individuality, while also listening to others, making up for their weaknesses, and taking suggestions from the conductor. While a conductor standing on a podium may at first seem like an exercise of power, Dr. Fryling is insistent on allowing us to know that we are the ones who make the decisions; he is merely trying to help us stay together and be aware of the things on the page, and that we should think of him as a “colleague” when we are performing together. As a matter of fact, anyone who believes they hold more power than anyone else in a group poses a threat to its oneness. Not only are we sharing the enjoyment of the music, but we share trust in our colleagues to make up for our mistakes.

In this trusting environment, learning and teaching are allowed to happen simultaneously. This anomaly was made totally clear to me when I had taken notice of the student teachers in chorale and chamber choir, Charlie and Brianna respectively. Charlie, a senior, conducts in chamber choir as a part of her independent study to research a choral group, as a conductor and a student, and understand its functions and its philosophy. For me, seeing her stand in front of the choir as a conductor one minute only to be sitting with the rest of us the next minute helped to solidify the notion that teaching and learning are happening simultaneously. This notion deepened when I had asked Dr. Fryling about her study, when he said “doing an independent study allows her, and both of us, to talk about what happens in rehearsal and dissect it and talk about what the philosophy is behind it” (Fryling). Despite Dr. Fryling’s obvious seniority over one of his students, both parties are discussing and learning, proving to me there is always learning just as there is always teaching. Brianna conducts for the chamber choir as a way to work toward her Master of Arts, and the same teaching and learning applies to this, as when she is not conducting she is participating in the choir as a singer. Of course, not only does this pose as a great lesson for those participating in the choir, but also offers a great opportunity for those who may be interested in taking a similar role in the future as a student conductor. When I asked about how Charlie came to conduct her independent study in chorale, I was told, “you basically ask” (Fryling).

Fortunately, though the chorale and chamber choir are of the university’s more select ensembles, Hofstra’s University Choir (U Choir) provides an equally legitimate choral experience to more students. All of these ensembles require an audition, but it is certainly not one to stress over. Seeing as choir does not require any external instrument, I am personally surprised there are not more people who wish to participate.

As a result of the lack of an instrument, choir helps musicians to develop audiation skills. “Audiation is the process of both mentally hearing and understanding music, even when no music is present. In essence, audiation is thinking in music or thinking about music in a way that the brain is able to give meaning to the sounds” (Dwicks). The Gordon Institute for Music Learning calls it “the foundation of musicianship,” as it helps when reading music and improvising (“Audiation”). The skill of hearing music in one’s head is harder to develop on an instrument as there is less of a bodily connection. A musician may see a note on the page and play it on the instrument without thinking of what that note sounds like beforehand, whereas a singer must hear the note in his or her head before being able to sing it.

I am deeply grateful for the opportunity provided to me to participate in Hofstra’s choir programs, and I feel it is my duty to let others know the joy of performing in a choir. Regardless of background or major, we all can join together to create something beautiful as long as we agree to trust and listen to one another. This experience has been one of the best for me, and I hope it can be that way for many others as well.

Posted by Taking Giant Steps Press at 7:42 AM