The Dark Side of Civilization by Jennie Spellman 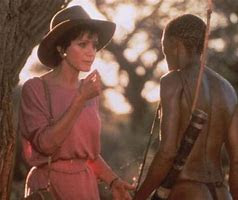 America likes to claim the title of being one of the most “civilized” countries, but what does civilized truly mean? After watching Jamie Uys’ The Gods Must Be Crazy and joining KP’s class discussions, I became genuinely disturbed by the word civilized and its true definition. Throughout our lives, we are influenced by societal norms and peer pressure. Everything we embark upon is done with the consideration of what other people will think of us. We are goaded into what we wear, what we do, what we buy all to answer the silent question: how will I fit in? In “The Ironic Hospitality of the Kalahari Desert,” Morgan Morrill writes of our American lifestyle, “There is barely time to breath in this machine-like world with the amount of meetings and activities that everyone has written on to their calendars” (Morrill, par. 1).


At first, I believed I was not a part of this machine-like world until writer and director Jamie Uys helped me understand just how deeply rooted societal conformity is in my life choices. He delivers the effects of restrictive societal norms for the viewer to experience first-hand. In comic fashion, The Gods Must Be Crazy analyzes the days of the week and our distorted perception of time. I thought back to the film Walkabout in which director Nicolas Roeg demonstrates that the true flaw of civilized culture is its inability to adapt or adjust to circumstances. He allows the viewer the chance to analyze the actions of a civilized British schoolgirl in the Australian Outback, an environment that is deeply unfamiliar to her. In different ways The Gods Must Be Crazy and Walkabout reveal how these pressures obstruct our ability to habituate, accommodate and acculturate to new conditions.

Furthermore, The Gods Must Be Crazy is a mockumentary about the Kalahari Bushmen and their way of living. The film compares the Bushmen lifestyle to the civilized lifestyle in apartheid South Africa. Uys employs satire in order to force the viewer to see the civilized world in a new light. Although Uys only focuses on the civilized world for a portion of the film, he targets the many failures of cultural adaptation. As the camera moves away from the serene and calm habitat of the Bushmen, the viewer is then hit with sequences of crowds, busy streets, and towering buildings (Uys, 00:05:30). The contrast that Uys creates highlights the wholesomeness of the Bushmen community against the civilized lifestyle displayed in short, chaotic fragments. The voice of the narrator accompanies these scenes in a demeaning tone. The narrator explains how “civilized man refused to adapt himself to his environment and instead adapted his environment to suit him” (Uys, 00:06:36-00:10:30). The civilized man thus set standards for society, which we call social norms.

In “How Social Norms Affect Our Decisions,” Doctor Carrie Steckl describes social norms as, “expectations that inform us how we’re supposed to behave in certain situations – [that] are ubiquitous in our society” (Steckl, par. 2). She explains how social norms have four common aspects: they tell us what to do and what not to do; they are socially shared; they carry an element of control or sanction; and they highly influence one’s behavior (Steckl par. 3). These expectations ultimately control how we act as individuals and how we act as a community.

In The Gods Must Be Crazy, Kate Thompson is a writer for a big city newspaper. When one of her coworkers asks her to write a story about handicapped children, she quickly refuses the idea saying, “Sorry. I’ll only print sweetness and light, even if it bores the pants off them” (Uys, 00:07:05). Just a few seconds later another one of her companions asks if she could write a story on the teacher shortage in Botswana. Instead of considering the idea, Thompson says again, “I don't know. I got bawled out for writing a story on mugging. My page should be sweet and light, like Liberace and Jackie Onassis” (Uys, 00:07:36). Thompson is letting social norms control her and what she writes about. Instead of writing about something that peaks her curiosity, she is limited by convention to write about topics that are “sweet and light” even if they may be boring. Society writes the script of our lives, and like good actors, we play the part. These constraints are preventing us from adapting and advancing as human species. 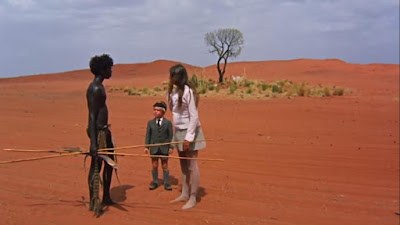 The inability to revamp and reshape our limited outlook is taken further in the film Walkabout. Roeg shows us the journey of a teenage British girl and her younger brother who must endure the Australian desert on their own when they are abandoned by their suicidal father. During their “walkabout,” they encounter a young Aboriginal man who is accustomed to the dry Australian desert. Throughout the film, The Girl is unable to acclimatize to the Aboriginal way of life due to the expectations of her civilized lifestyle. In “Walkabout: Where the Wild Things Are,” Allison Bellesheim writes, “The two children are symbols for civilization, as they grew up in a world where they learned proper etiquette, were taught to get educated to ensure future employment, and were given food instead of having to hunt for it” (Bellesheim, par. 2). Coming from a strict and demanding society, The Girl cannot conform to a new way of life in her walkabout. This theme is highlighted throughout the whole film, but it can specifically be seen when she first meets the Aboriginal hunter. She is unable to ask him for water due to the language barrier (Roeg, 00:36:30). Further on in the film, The Girl worries to her younger brother about their appearance, even though no one is there to see or judge them. She says, “You must look after your blazer. It’s got to last. We don’t want people thinking we’re a couple of tramps. And you’ve put a hole in your pocket. Don’t! You’ll ruin your nice shoes” (Roeg, 00:34:28-00:37:10). Her bizarre reaction is merely an effect that social norms have engraved in her brain. Even further into the film as The Girl, The Boy, and The Aboriginal are painting on the rock walls, she complains saying, “I wish we had a proper pencil” (Roeg, 01:10:53). Her rigid upbringing in a “superior” and civilized society has caused her to become so incredibly closed off to change that it obstructs her from refashioning herself. My classmate Lindsay Knight describes her as, “cracking under modern society, living the same type of monotone lifestyle instead of adapting to the Aboriginal way” (Knight). Mentally stuck in her civilized ways, she proves unable to grow culturally. 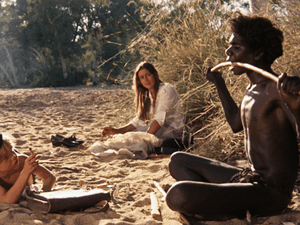 On the first day of class, we learned about three diseases in our society, especially for our generation: short attention spans, overwhelming competition with one another and a paralyzing fear of being judged. The third one stood out to me the most. It is the fear of stepping out of social norms, which stops us from widening our outlook and deepening our personal growth. One elemental step in life that people are unfamiliar with is college. In American society, it is assumed that one will go to college right after high school. However, this may not be the right path for everyone. Although high schools host college fairs and college panels, they seem to be missing a very important alternative: gap year programs. This past semester, as I was studying at Hofstra University, one of my closest friends taught at a private school in Thailand. Not only was she pursuing her interest in becoming a digital arts teacher, she was also evolving and growing as a person. Her gap year “walkabout” helped her discover her true path in life in a way she would have never been able to have done while in college.


Having the strength to step out of the societal comfort zone enables us to learn in rare ways. Without this courage we are forever stuck in society’s restrictions, stopping ourselves from becoming our best. We visually identify the consequences of conformity in these two films as the inability to make individual choices. The way in which “modern” society forces conformity so strictly in The Gods Must Be Crazy and Walkabout has helped me to discover a new way of living. As I have grown throughout my first year in college, I have learned to not care what others think. I have been able to overcome my fear of being judged, which has led me to grow intellectually and as a person. The toxicity of conformity in today’s society is apparent to me now, and if others are not willing to see this, we may not be able to advance and adapt to upcoming obstacles. As the true meaning of civilization is uncovered in these films, the question is raised: how will viewers defy the high pressures of social norms and break out of the cage society puts us in? 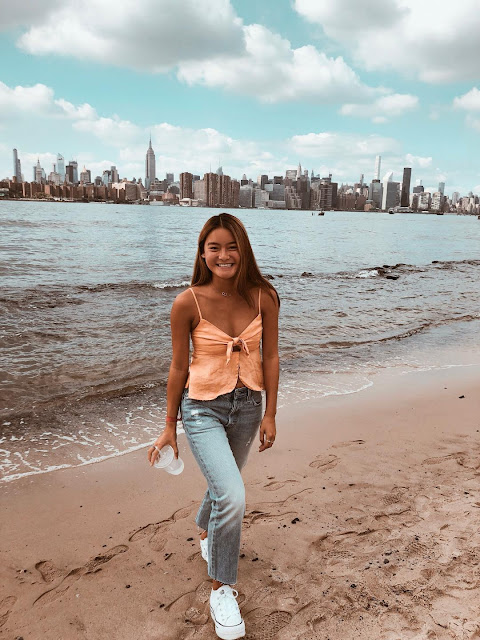 Posted by Taking Giant Steps Press at 7:17 AM