Pulling That Weight: How Colleges Fail Survivors of Sexual Assault by Sarah Baum 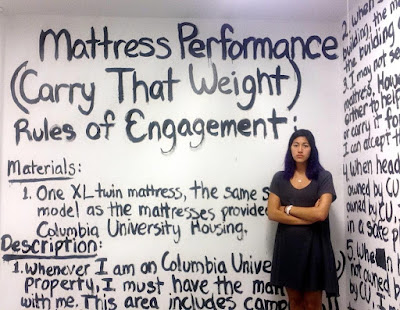 When they were a senior at Columbia University, Emma Sulkowitz (who uses they/them pronouns) was raped in their dorm by an acquaintance. They reported it to campus authorities but fell on deaf ears. When that failed, they reported their assault to the NYPD, and their case was ridiculed and dismissed. So, Emma coped with their pain and trauma through art. A visual arts major, Emma conducted their senior thesis on their assault. They called it “Carry That Weight” in reference to the emotional weight one carries after an assault and the psychological pain Emma endured knowing their rapist was still at their school. They carried with them a 50 pound mattress, identical to the one on which they were assaulted, everywhere on campus for the entire rest of their time at Columbia. “Carry That Weight” went viral; Emma was featured in The New York Times. But the sensation did nothing to help their case. Along with the knowledge their rapist would never be punished for his crime, they ended up carrying the mattress with them to get their diploma during graduation. These stories are commonplace on campuses today. Colleges do not have the resources nor the motive to protect their students from sexual violence.

One in five women will be assaulted on a college campus (RAINN). Yet, when a student is a victim of sexual assault on campus, they have no ally in their school. College campuses fail to address proper prevention and intervention tactics, such as as consent education. According to The Atlantic, “Students arriving on campus are, by many measures, less socially developed than were those of previous generations...They also create an environment in which sexual experimentation followed by shame or regret is common, as is poor communication by both parties” (par. 2).  Most states do not have any requirements for sexual assault prevention training. Of those that do, many are one-time requirements of presentations or lectures that do not resonate with students. But these programs are integral to preventing sexual assault. According to The New York Times, of a small sample size of 400 or so women, 9% of people in the control group had been sexually assaulted, contrary to 3% of those who received training. It also found that just 22 women needed to receive the training to prevent one sexual assault (par 4-5). Yet these programs continue to be cut in lieu of more profitable endeavors. Students are damned by their schools before they can even be victimized by their classmates.


Moreover, colleges lack the tools needed to react in a just, swift and ethical way to allegations of sexual assault. Title IX laws are unclear and being implemented at polarizing extremes. On one hand, it may lead to a galvanizing force for college campuses that largely use the single investigator model wherein one staff member serves as judge, jury and prosecutor.  Meanwhile, a letter sent out to university officials by the Obama administration instructed schools “to investigate any reports of possible sexual misconduct, including those that came from a third party and those in which the allTitle IX, eged victim refused to cooperate. (Paradoxically, they were also told to defer to alleged victims’ wishes, creating no small amount of confusion among administrators)” (The Atlantic, par. 7). This policy, though well intentioned, has the potential to further traumatize victims. Sexual assault is an act of taking power and control away, and by doing the same in the aftermath rubs salt in the wound. Yet, these “third party reporter” cases made up 30% of undergraduate cases of sexual violence. The same article found the timespan of college sexual assault investigations have increased from 289 days to over 900.  Such practices lead to incidents like that of Kojo Bonsu, a University of Massachusetts-Amherst student who was banned him from all campus activities and housing once allegations against him were made in an effort to adhere to Title IX policies. While precautions like these can be integral in keeping victims safe, the investigation lasted six months, only for him to be found innocent of sexual assault. By then his physical and mental health had plummeted, and he had to withdraw from classes. He will still graduate but two years too late and at another school. He is a victim of a different kind, subjugated under the very same broken system which lets actual sexual predators walk free. 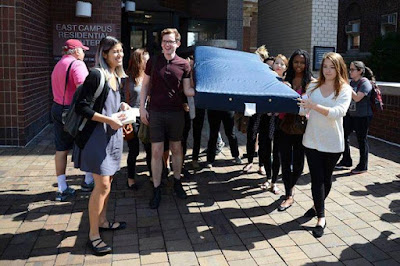 
This transcription occurs because colleges want to produce artificially low numbers to protect their image. Colleges do not wish to be seen as a place with high rates of sexual assault, something that may deter potential students and donors. Yet, instead of solving the problem for the betterment of students, they sweep it under the rug in a “quick fix” effort to save their bottom line. Their other reason is to protect “priority” students. According to The Dallas Morning News, Baylor University coach Art Briles was on staff for years and made aware of 52 rapes committed by 31 players, but he did not act. During a gang rape in 2012, Briles had placed the blame on the victim, saying “Those are some bad dudes. Why was she around those guys?” Similarly, a lawsuit against the University of Tennessee found it showed unfair bias in favor of alleged perpetrators, particularly athletes, providing them exclusive access to a list of recommended lawyers. Then, in 2002, a Penn State football player was found guilty of rape and suspended for two semesters, yet he was still allowed to travel and play with the team. College sports, being a multi-billion dollar industry, is a great revenue generator for many institutions of higher education. It all boils down to profit; it is more profitable to retain star athletes, no matter the cost, than it is to protect rape victims.  Not only does this strip victims of justice but endangers others, as many are repeat offenders. FiveThirtyEight reported most rapes are done by a small group of people, as the average sexual predator will commit 6 rapes apiece. But because they are athletes, they get away with it, a phenomenon the Department of Education said led student athletes “to believe that there were special rules for people with special talents.”

Hofstra University is no stranger to these pitfalls. Its student policy “prohibits discriminatory harassment, relationship violence and sexual violence,” meant to ensure “an environment conducive to personal and intellectual growth.” Yet in May of last year, New York state courts found Hofstra to be in violation of its own policy regarding sexual assault when it took over a year to resolve a claim of domestic violence, in which a student alleged her boyfriend tried to strangle her and threw pepper in her eyes (Nixon Peabody). Throughout the year-long dispute, Hofstra violated the school’s own policy which calls for claims to be resolved “with reasonable promptness” defined as up to 60 days. The court also found that Hofstra acted “capriciously” in banning the male student from the dorms before having a formal hearing. Moreover, according to The Hofstra Chronicle, our Title IX Officer resigned, was replaced by a new staff member with a new title and had their office moved. But Hofstra never made this information known. So, when students with concerns of sexual harassment or violence came forward, they faced substantial roadblocks in finding the right person to contact.  It was a severe breach in transparency that was only resolved when student reporters pressured officials into sending a public email to make the information known.


In essence, college campuses are ill-equipped to deal with allegations of sexual assault and violence. No federal law mandates the consent training that is integral to reducing sexual assault on campus. Therefore, thousands of students each year embark on their college journey without it. Then, when instances of rape do arise, colleges fail to resolve the matter in a just and swift fashion, to the disservice of both the the complainant and the accused. They either hyper-galvanize the cause or ignore it all together. Colleges even have incentive to suppress these numbers. As a result, students cannot feel safe on campus. The very institutions bound to protect them literally put their lives in danger. Students’ bodies are weighed with profit, and oftentimes, profit wins. The only way to resolve the epidemic of rape on college campuses is to work together with government institutions to implement meaningful legislation that holds universities accountable and provides realistic and specific guidelines on to how stop the issue at its core. Only then will students be safe on campus. We all have a torch to bare and a role to play in carrying that weight. 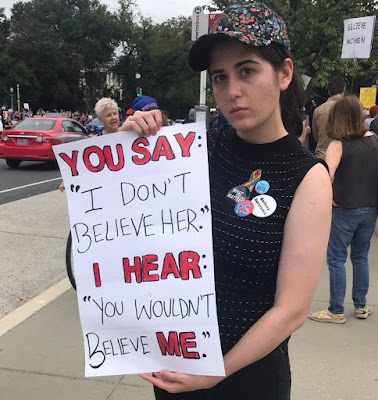 “Faculty.” What Does It Cost to Attend? | Hofstra University, New York,
www.hofstra.edu/faculty/senate/policy-series-043.html.

Posted by Taking Giant Steps Press at 11:38 AM