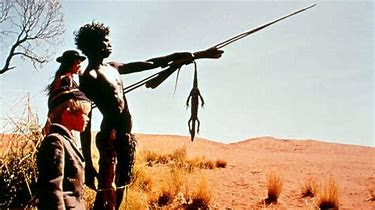 Robert E. Howard wrote in his novel King Kull, “The more I see of what you call civilization, the more highly I think of what you call savagery.”  During the era of European colonization, western empires driven by greed sent out to stake claim of land, resources, and people not there for the taking.  The first British settlers of Australia were criminals and rejects who had the same western mentality of taking without giving.  The Aboriginal people of Australia were treated below the line of second-class citizens.  There was no mercy from white Europeans who wanted the land.

The time known as the Stolen Generations was a period in Australian history in which many Aboriginal children were abducted and forced to leave all traces of their “savage” life behind.  This phenomenon of cultural genocide can be observed throughout the world, including Canada, when in the 1970s the Canadian government forced the Inuit people of the Artic Circle onto reservations equipped with unfit homes and schools. Far too often Native atrocities are neglected and overlooked due to the ignorance of the majority.  Nicolas Roeg’s 1971 film, Walkabout, brings to light the way of the Aborigine and the white man through artistic comparisons, using flashbacks and cut scenes to provoke an uninformed audience of the social injustices in Australia.

The opening sequence starts with images of stone walls that then fade to a brick wall, signifying the difference between natural and man-made borders.  The camera then moves to a typical 1970s day in Sydney, Australia. Throughout the scene the screen switches back and forth between following the father, daughter, and son.  The father, portrayed by John Meillon, is dressed in formal attire and walks through crowds of people dressed similarly.  Everyone is rushing around systematically, creating a hectic environment associated with major cities like London or New York.  Jenny Agutter, as the daughter dressed in a school uniform, sits in class surrounded by other girls practicing their French vowel pronunciations.  Also in a uniform the son, Luc Roeg, plays outside with other boys, watching as army men march by. Roeg chose to introduce these characters alongside many similar looking people to give the impression of them being just another white Australian family. The didgeridoo, a traditional Aboriginal instrument, mostly plays in the background throughout the entire scene, with the exception of when the screen switches to the daughter in the classroom.  In this part the viewers only hear the sound of student practicing their pronunciations.  Roeg may be alluding to the Stolen Generations when Aboriginal children were forced to speak English, hinting the end of Native tradition.  This whole scene is painted with western civilization from the cars, clothing, and the ethnicity of people in the city---this is until John Meillon’s character brings both kids into the outback to murder them, changing the setting to a barren wasteland. 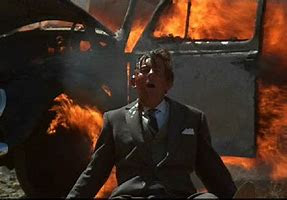 After firing multiple failed shots at his son, the father sets fire to the car and shoots himself.  With their father dead and the car in flames, the siblings scurry away into the Outback armed with little food or water.  After wandering for days and on the brink of death, the pair come across this beautiful oasis with a small watering hole and a large tree inhabited with birds and edible fruit.  Getting comfortable, they stay for what seems to be multiple days.  The described scene opens with shots of green and yellow parakeets flying around playing, as the daughter sings.  The beginning of this scene brings to mind the story of Snow White, a common fairytale, singing with the forest animals as they clean her house.  Agutter soaks her feet while her brother, Luc Roeg, plays in the water and asks, “We’re lost, aren’t we?” She replies, “No, of course not,” with a look of uncertainty written all over her face.  The camera switches to show a bird drowning, unable to escape the water, then the next shot is of a grub worm picking at the fruit.

The next morning, they wake to the water dried up and the tree covered in snakes.  Most humans today are not living sustainably.  No doubt in the years to come, many resources that are relied on will become scarce and the environment will fall into disrepair.  This culture of taking from the Earth and not giving back is killing humanity, and a detriment to the future generations For the kids in the film, the resources given to them were a blessing but overuse depleted it all.  The drowning bird and the grub both foreshadow the death of the tree and show that something is wrong, but they chose to ignore it.  This may sound familiar because it runs parallel with today’s environmental crisis. Many people choose to ignore the clear warning signs, not demanding a change.  Stuck again without food or water, the children stay, hoping the water will come back. The water never comes back, but in the distance they see a dark figure moving toward them hypnotically. 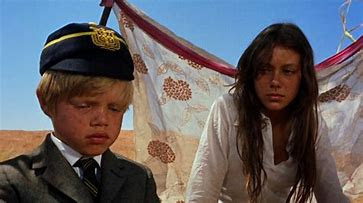 The boy sits up and whispers, “Dad,” which wakes his sister.  They watch in amazement as the man hunts a large lizard.  The Aboriginal, portrayed by David Gulpilil, speaking in a tribal language, approaches with the lizard in hand, pointing at the moist ground where the watering hole once was.  He determined that they are white and after no response from the children, he walks away only to be chased after by the kids shouting in English begging for water, further confusing him.  Until the boy gestures to drink instantly it clicks in the hunter’s mind.  He then teaches them to drink from the moist dirt.

After they travel together, the hunter successfully chases, kills and butchers a kangaroo.  With each swing of his sharp rock, the screen continuously switches to a white butcher aproned in all white chopping meat with a large cleaver.  The switching between visuals shows the connection between the two ways of butchering. Although they are essentially doing the same thing, Roeg uses the constant changing between frames to show that what may seem savage or taboo from one point of view may not be so from another. The group continues to travel until they come across something which changes the dynamic of the hunter and the girl’s relationship.

Eventually the trio come across a house. The daughter runs to it, hoping there will be people inside, but she is sadly surprised to see that it is abandoned.  Wandering around, she takes in the familiar sights of photos hung on the walls and the interior of a man-made structure.  The hunter approaches her speaking and the camera then switches back and forth between their faces.  As he talks and she listens, her eyes continuously dart over to a piece of a broken mirror on the floor reflecting a rainbow onto his face.  Her struggle of focus between him and the mirror symbolizes her internal battle between the modern (the mirror) and the savage  (the rainbow on his face).  She asks him to fetch water, switching his role from the provider to the servant.  The man who saved her life in the wild has been reduced to a water boy in her civilization.  As he takes the bucket from her he also repeats, “Water,” which is the first time in the entire film he speaks any English, alluding to the assimilation forced upon many native Australians.  This scene is the turning point in which their relationship changes.  The two kids, especially the girl, wish to return to their original lives. 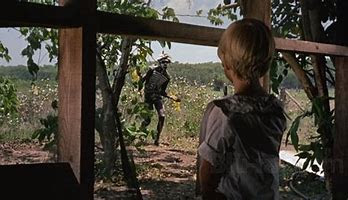 While the Aborigine is hunting an ox going in for the kill, white men in a large car drive by startling him.  He then watches with a blank expression as these men shoot an ox without hesitation or struggle.  The shot is fired and it echoes throughout the Outback as the screen switches to animals fleeing the area.  The sound of the shot continues to repeat as the film emphasizes that this animal is dead.  After the animal falls, a man gets out of the car and slits its throat.  Roeg adds this traumatic scene to show the Walkabouter’s death of innocence.  Hunting for sport is an outrage to most Natives and most uncommon in their society whereas the idea of only taking what is needed is often ignored in today’s society.

This film brings to light Native atrocities by comparing cultures through intense visuals captured by Roeg. Culture is essential to human existence.   No one deserves to have their culture die.  Far too often are the voices of the Native people unheard.  From Africa to India, from South America to the Far East, the silencing of indigenous voices is indeed the "Colored Man's Burden." More films need to capture the idea of Walkabout, which inspires individuals to join the movement.

Posted by Taking Giant Steps Press at 9:05 AM