“The Kids Are the Didgeridoo: A Musical Study of Society in WALKABOUT” by Brittany McGowan 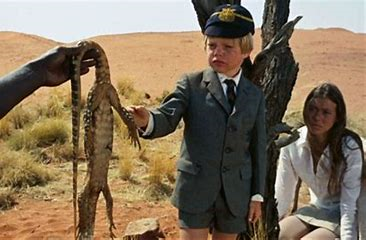 Nicolas Roeg’s Walkabout is a story not only of survival but a story of cultural solidarity, clashing societies, and lack of knowledge. His film is full of extreme symbolism and representation moving from the music to the characters to the societies they are from.

The film opens up with a montage of the two main wealthy, privileged, white, British children going about their daily routine: toys and mindless vocal lessons held up by the long, unsettling blare of the didgeridoo. The low, loud hum sets the wild tone of the overall film and foreshadows the coming events the children will experience. A common practice in film, the opening music establishes the feel of the film as a whole: unsettling. The native Australian instrument does not, however, match up with the film imagery of the opening montage, which then foreshadows the cultural differences between the two children and the Aboriginal boy later in the film. The montage would match up better with music that establishes the everyday hustle-and-bustle of privileged children rather than the ominous hum of the Outback. The didgeridoo is out of its habitat.

When the children go on their picnic, they bring a radio. The radio is playing modern music in the middle of the desert. The music, although matching with the picnic, does not match the barren desert surroundings. As the children head deeper into the Outback, choral music plays as the camera zooms out to a wide shot of the dry landscape. Much like the didgeridoo and the opening sequence, the calm choral music featuring the voices of children mentioning finding the light does not match up with the gravity of the situation that the siblings have gotten themselves into. A few minutes later in the film, the children climb to the top of a mountain to try and see where they are. At this point, uplifting orchestral music begins. The score initially matches up with the shots of the view, but after some thought, the audience remembers again that these young children are lost in the Australian wilderness with nothing except for some toys, a radio, limited food leftover from the failed attempt at a picnic, and their uniforms. Uplifting orchestral music might be enhancing the beauty of the view, but it is fighting the dangers in the story.


The music in the film has a habit of not corresponding with its scenery or situation that it should be enhancing. In a way, the music represents the children. The grumble of the didgeridoo is extremely out of place in the urban environment it was introduced in. In the wilderness, the choral and orchestral scores do not match up with the dangers of the wilderness, thus showing cultural separations. The children, with the radio, have their own music, appearing very out of place. In the desert, the children are out of their natural urban environment with their lack of survival skills and dress shoes. The music turns the story completely over from the opening montage to the rest of the film. The children become just as out of place as the didgeridoo in the city. The music represents one of the many cultural and societal differences in the film.

The didgeridoo is the oldest wind instrument known to mankind. “Researchers have suggested it may be the world's oldest musical instrument, over 40,000 years old” (“Didgeridoo Facts”). Throwing this instrument in to support footage of then-modern society immediately shows how drastic the differences in the film will be. Once the situation is flipped, with orchestra, choral, and modern radio music supporting the native Australian desert, the music supports the children, enhancing how out of place they are. The children go through their journey with no survival skills. They are modern people paired with an ancient civilization. “Australia’s Aboriginal civilization is the oldest on the planet, dating back some 50,000 years” (Klein). This film takes the two most societal extremes and makes them work together. Unfortunately, these two societies and habitats do not know how to work together. The teenage girl, who takes a leadership position trekking across the desert, has hardly any survival skills and no knowledge of how to attempt to communicate with the Native.


The older sister, not really having made any drastic survival errors since the decision to run deeper into the desert (which got the two into the mess that is the rest of the film), makes her first mistake. As the two children are sitting down, taking a break, the young boy mentions that he is hungry. His sister tells him that he should eat salt. She claims to have gotten that idea from her uncle, who ate salt in the army. The mistake is that salt is a solute. Now, the girl’s uniform indicates that the school she goes to is private and expensive. Generally, these schools have a good academic standing. Such schools would also teach their students that eating salt will cause them to become dehydrated, even though it should be common sense. Most children know that if they were to pour salt on a snail or slug it would cause the creature to shrivel up and die because the salt extracts the moisture. The young boy, of course, eats the salt. In the next scene, the boy appears to be rendered unconscious; most likely due to a combination of the lack of food, overexposure to intense sunlight, and lack of water with too much salt. This is the first real indication that her prestigious education has taught her not much that is of use.


Within the next few minutes of the film, the girl makes crucial errors. After the two find a watering hole, they decide to bathe in it and attempt to clean their clothes. It is implied that they do this before filling up their water bottle, since in the next scene, the boy complains about not filling up the water bottle. The girl also snaps at her brother, telling him to try and find his blazer because “We don’t want people thinking we’re a couple of tramps” (Roeg 23:14), even though, at this point in the film, there is no one to be found. A few minutes later, the girl tells her brother not to walk through the mud that was once their precious watering hole because it might ruin his good shoes. Apparently walking through the desert in dress shoes is not enough to ruin them. 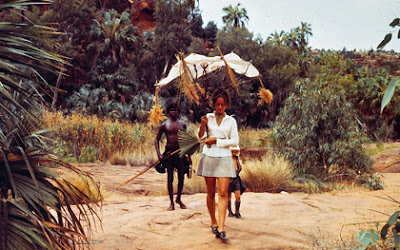 Education is the first notice (since the musical symbolism) in the film that separates the children. Right after they approach the Aboriginal boy, the girl asks him where they are. The boy yells at his sister to ask the stranger for water. She continues to get more and more frustrated when she realizes that the Native cannot understand her language and makes no attempt to try and build a connection so that he can understand her needs. It is not until the brother pipes up and motions for water that the Aboriginal boy understands and helps them. The girl’s education clearly has not taught her basic communication. It has separated her from her surroundings, engulfing her in a cultural and societal bubble. Privatized education, or just western-civilization-style education in general, leaves out basic common sense and survival. It would be more understandable to leave out survival skills if she was still in England, but now, being in Australia, with desert surrounding most points of advanced civilization, survival is key. Her logic is barely present. Education and knowledge are two entirely different things. The girl has her education, but she has no legitimate knowledge that can help her in situations outside of her comfort zone. She is more concerned about her social status than she is about survival.

Children learn what they live. Put kids in a class and they will live out their lives in an invisible cage, isolated from their chance at community; interrupt kids with bells and horns all the time and they will learn that nothing is important or worth finishing; ridicule them and they will retreat from human association; shame them and they will find a hundred ways to get even. The habits taught in large-scale organizations are deadly (Gatto).

We are all a victim of failed education. We are taught what the government wants us to know, but not what we necessarily need to know. “We are students of words: we are shut up in schools, and colleges, and recitation-rooms, for ten or fifteen years, and come out at last with a bag of wind, a memory of words, and do not know a thing” (Emerson). Once we are thrown out of the environment we know, all we can rely on is our past education and experience. Yes, the children’s actions were not thought through because in the world of film, actions are done up exponentially so to be obvious and prove a point. Once we are thrown out of our environment, we become the children. We become the didgeridoo of our own story. 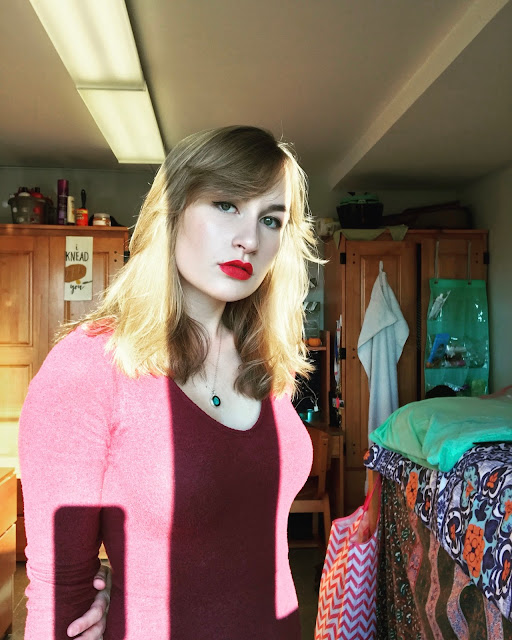 Posted by Taking Giant Steps Press at 4:55 AM