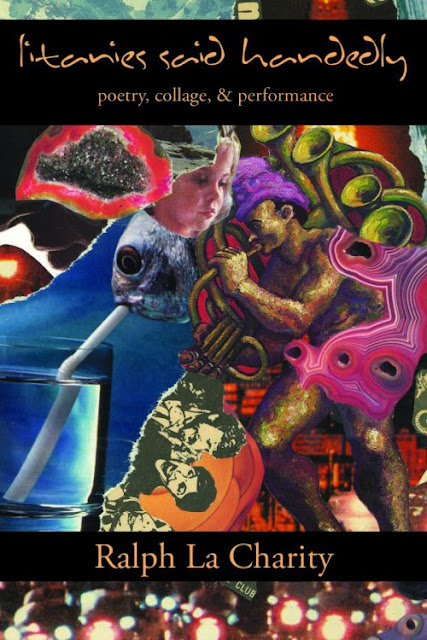 Listeners and lovers of the open mic, ancient-to-the-future scribes of the oral-aural, laya yogis and lyrical-miracle technicians of the sacred, cross-country Whitmaniacs of every stripe and Democratic Vista impulse will delight in journeyman Ralph La Charity's latest from Dos Madres Press in Loveland, OH, ($20.00 at www.dosmadres.com): Litanies Said Handedly: poetry, collage, & performance.


The tongue-in-cheek title is the key that opens this delightful book. Consider the words: Litanies (Middle English) are simultaneously “petitions for use in church services or processions, usually recited by the clergy and responded to in a recurring formula by the people” AND “tedious recitals or repetitive series”---that is to say that both meanings are jokes. The only church he gets remotely close to, or reminds one of, is the Church to John Coltrane. As for tedium, even as he delivers his ghost-driven/rust-belted Homeric tales, Orphic songs in hell and street-wise celebrations of signifyin’ monkeys, Frankie-&-Johnny lovers, neo-Irish aborigines and bar room Crazy Janes, one is at the edge of one’s seat.  This is oral story telling at its best. As for Said Handedly: beware! Even reading the poetry silently causes the ear to want to hear these sounds aloud, but one must view La Charity actually kicking it live (https://www.youtube.com/watch?v=C-xSNw8N4ZI&feature=youtu.be) to realize that his presentation of his work, a combo of Joe Cocker spasmodics meeting Robert Bly’s arm-wave scansions, is indeed said with his left hand in full metric swing and his voice a trained instrument of multiple meanings and dial-a-dialect possibilities!


Check his opening shot, “he was a dandy mon.” On the page (p. 81 in the book) the language is a tad spooky and the repetition of “a dead man walking” a bit grim, but to hear him rock it aloud is to experience real fright that won’t quit. Note that his voice jumps into song and then returns to speech in a performance matched by his body’s full participation. This reviewer heard the spoken version first, and although a reader may think that the 25 minutes of youtube is all one needs (BTW: he recites entirely/tirelessly from memory!), I have taken great delight in finally seeing his spoken word in print. Moreover, the twelve collages, multiple front matter dope, and his appendices on the art of oral poesie, really contextualize his Algren-esque quests.


Regarding this art form, in “Prefatory notations,” he calls it “an obscure-side apprenticeship, akin to learning pick-pocketry; a dark economy guild of seers & sounders” and sees himself as “a practitioner of call/caul poetics, a self-embodied variorum; a calling forth from within fused with a calling out of the surround, this transactional dynamic yielding a utility of rare gas bases for actualizing the Body Poetique; a Harm’s Way Yoga of public poet alchemizing.” He sees poetry as “the shapeliness of form worn as sound cloak” and calls the book “an assemblage of Ever-Dance, the shards captured mid-melt as scored scourings meant for the tongue-trigger emptying forth of an early dog days evening.” In “Interrupted,” he remarks that “Makars commune with the dead & artists / who’ve brought back are who’ve / brought back from the Other side.”


This graybeard big daddy from Cincinnatti encants, enchants and takes the kind of chances that an improvising be-bopper might take with the chord changes---or that, as the nuns would say back in the day when we danced too closely at the parish dance---“leave room for the Holy Ghost.” His dedication reads, “…These poetics descend in a rush, tripping off the tongue, resonant to the blind who will, unaccompanied, sing.” He's the real deal. 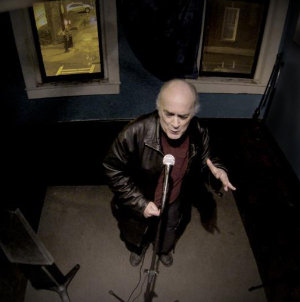 Posted by Taking Giant Steps Press at 7:58 AM