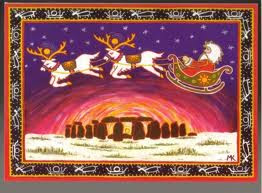 Thanksgiving is here and gone, and once again, Christmas is fast approaching. I’ve noticed many homeowners are taking advantage of the unusually mild weather by decorating their houses with lights and the larger-than-life blow-up displays that seem to get more over-the-top every year. The main streets of the village have already been lined with holiday trimmings and as I drive through the neighborhood, I snicker with ill-feelings towards the lunacy and hypocrisy of the season.

As a kid, I loved Christmas. The months from June to December seemed to crawl as the joyful anticipation of the holiday grew more intense with each passing day. I think it was a combination of things that made Christmas so special for me. It goes without saying, receiving presents topped the list, but aside from that, it was the magical, dreamy feeling in the air. Somehow I was always taken over by an overwhelming, indescribable sense of security, peace and happiness. The people around me appeared to be curiously happy and friendly. Family gathered at each other’s homes to share meals, make conversation and exchange gifts, and maybe it was just my naïve, childlike way of looking at things, but love seemed to shine in everyone’s eyes. In my world, at Christmastime, everything ran smooth and each minute unfolded as if it had all been divinely planned.

Sitting tightly together in overcrowded pews, our family attended midnight Mass probably so we wouldn’t have to interrupt the Christmas Day festivities by having to attend church. To put it mildly, we got it out of the way! Year after year I listened to the choir sing the old familiar hymns about the little town of Bethlehem and the Savior being born to a virgin. It was hard to tell whether or not the congregation was sleeping or listening attentively to the repetitive sermons of the presiding priest as he recounted the heart wrenching tale of Mary and Joseph’s cold winter’s night. When the Mass was over, everyone greeted each other with hugs, handshakes and joyful exchanges of “Merry Christmas.” Looking back, it’s hard to tell if I really believed the far-fetched chronicles of the first Christmas. Everyone else seemed to, so how could I not have? Was it really such a far cry from the fable of Santa and the Flying Reindeer?

Today the world’s a much different place than it was fifty years ago. I don’t believe it’s at all necessary to rehash just how appallingly commercial Christmas has become. The complaints coming from Christians about how the real meaning of Christmas has been lost are unrelenting. My question is does Christmas even have a REAL meaning? It’s sad, but the older I become, the more I begin to realize NOTHING is real! As people evolve, technology advances, and information becomes readily available, if we choose to do so, we can easily discover where many, if not all, of our rituals and traditions originated. All of our practices, our belief systems and our holy days can be dated back and attributed to the miraculous synchronicity of the Universe, such as the placement of the moon, sun and stars, the timing of the tides and the harvest. Somehow, man wasn’t satisfied with his equal role among the wondrous workings of nature and in an egocentric effort to answer the unanswerable, decided to create religion, deeming him significantly more important than all living things and ultimately waging war upon all that has been designed to sustain him. Pretty sick and unfortunate if you ask me!

I’m not going to expound upon why I don’t believe in celebrating Christmas or any other religious holiday. If anybody’s interested in broadening their minds or perhaps gaining some enlightenment, they can research the information for themselves. It’s right at their fingertips. What I am going to touch upon, however, is how tradition has enslaved us. The economy, after a few botched attempts at getting jump-started, is failing miserably. A vast amount of the population is unemployed and good-paying jobs are extremely hard to come by. Christmas, which has become the mother of all economy boosters, is once again right around the corner and the retailers are counting on the crumbling middle class to max out their high-interest credit cards in hopes of remaining in business. Parents will sink deeper into credit card debt not to disappoint their wide-eyed Santa believing children. Even though most people these days cannot afford to squander what little money they have, the guilt, obligation and pressure of having to make Christmas happen puts them in the poor house a little longer. When do we come to terms with the fact that all the stress and anxiety we put upon ourselves is nothing but illusion. We created it, we can eliminate it. If upcoming generations would bring up their children without feeding them the fairy tales that eventually lead to disappointment we can end this holiday stress! If upcoming generations raise their children without indoctrinating them with the guilt-ridden untruths of the religions of their ancestors, maybe we can put a stop to holiday lunacy.

Just for shits and giggles, why don’t we just admit to each other that none of us are sure about anything except death? Why don’t we just tell our kids the truth; humans have been on the earth for millions of years and we still haven’t figured out the meaning of life. Why not put an end to all the bullshit self-righteousness and encourage each other to simply love one another and enjoy the very limited amount of time we’ve got here. No one’s any better than anyone else. We all come and go through those revolving doors into eternity. If the answer is out there, one day each of us will find it. If it’s not, what does it matter?  Don’t stress, don’t worry and be happy! Happy Chrisolstichuwanzuka to all, and to all a good night!