The Art of Seeing: An Interview with RICHARD GINS 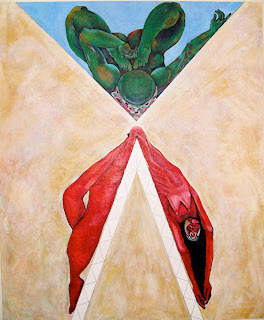 KIRPAL GORDON: Let’s start with your opening last month at Salomon Arts. It was a knock-out to see so much of your work, both large scale and small, centered on a theme that drew together so many elements of your craft.

RICHARD GINS: My recent show at Salomon Arts was an opportunity for me to pull together a specific body of work that has been evolving since 1974. When I made the first spontaneous drawing with geometric rectangular shapes imposing their will on the figure, I knew immediately that this very simple image was profound and important. With the strong interplay between rigid shapes and the fluid organic lines of the captive, squeezed figure, it held great potential to formally express many of the esoteric ideas I was studying. Over the years this idea evolved, each time reflecting my growing understanding of the struggle and process of human transformation into higher consciousness. First the obstructed images represented a kind blame, where there was something affecting us outside of ourselves, outside of our control; then the geometric shapes became windows to suggest a hidden inner world; and finally the shapes became the figure itself, with an inner figure inside, painfully unaligned with its outer shell, but now clearly it was an inner process, one we can work on to change, to align and to evolve. I want to do a more comprehensive show of the full scope of this visual evolution and for this I will need a much larger space. I was pleased that many people appreciated and understood the originality of this work and that it expressed to them important realities about the human condition.

KIRPAL GORDON: The show was also filled with plenty of surprises and discoveries. One thing I stumbled upon that I hadn’t known anything about was your project with the subway system and the . 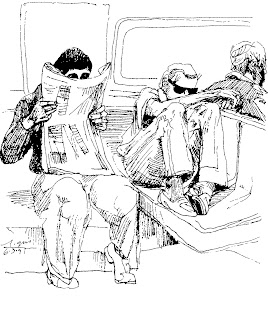 RICHARD GINS: My “Subway Rider” book was an effort to package a huge body of work based on direct drawing from life while riding the NYC subway over a 16-year period. The subway is probably the most culturally diverse place on the planet and so interesting. Drawing this captive audience, however fleeting it may be, demands that I quickly find my subjects and get my lines down on paper before my subjects leave the train. These simple line drawings capture some essence of humanity. My book was sold at the  where I had a public book signing and gave a talk about drawing. I still work from life as a discipline to keep my ability “to see” honed to a sharp edge.

KIRPAL GORDON: You were born in 1950 so it was possible for you to study and make art without the traditional reliance on drawing, but your “Subway Rider” is a celebration of a daily dedication to sketching.

RICHARD GINS: All painting in whatever genre, from realism to pop, still requires a foundation in drawing. I believe that the most fundamental skill a visual artist must develop is his ability “to see.” Without this, there is no understanding of the relationships between all the visual elements. It was clear early in my career that drawing from life is the discipline needed to learn this skill. Drawing from life helps to keep the link between hand and eye and between the outer world and our perception of it. I think that drawing in ink has also contributed to the quality of my line drawings because you cannot erase and must commit to letting your line flow with a character of the moment. Besides drawing from life, I have two other lines of work that have become part of continual practice. One is that I start with no preconception or agenda in order to find new ideas and images that spring from a blank page. This is very difficult and needs continual practice too. The other practice is to work on the themes and ideas already in development and to explore new possibilities and variations. All three of these lines of work must be worked on simultaneously. They overlap and together bring a more complex and complete vision of my work as an artist. 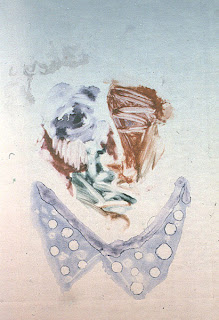 KIRPAL GORDON: I like what you say, especially in regard to your monotypes, the thing that first drew me to your work way back in the Eighties when you were showing at Hugh Piney Gallery.

RICHARD GINS: Yes, that show at Hugh Piney Gallery was exciting. It was written up as the “most current show in the city” because all the work were monotypes done within a week of the show. I conceived, curated and participated in the show along with many well known artists. I collaborated with Bob Blackburn’s Printmaking Studio and there was a sweet after party at the Palladium and a great write up about me and the show in ArtNews. I love to do monotypes because they are the perfect marriage of painting and printmaking. It has the sensibility of working in full color like a painter yet they have the unmistakable qualities that can only be achieved by printing the color on paper. I studied with a famous lithographer and did many editions, but I found making color prints slow and cumbersome having to use separate color plates and multiple printings for a single print. This went against my sensibility that color is an emotional experience, so I gravitated to monotypes which allowed me to work in full color directly on a plexi or metal plate. Once the plate is painted with the ink, the plate is run through an etching press to produce the one unique print. The plate can then be clean and a new image made or the residual image can be worked back into allowing for a kind of serial evolution of the image. I am willing to sacrifice the commercially viable multiple-image edition for a series of unique prints. I also like process where ink can be added as well as wiped away quickly allowing the image to go through many changes. There is also a time restraint because the image must be printed before the thin layer of ink dries. Monotypes are conducive to my long interest in gestural mark making and textures with its rich and versatile techniques. I have pushed this medium very hard yet still feel I have only scratched the surface, no pun intended.

KIRPAL GORDON: How are things in the visual arts now compared to when you were coming up?

RICHARD GINS: One of my most influential teachers told me some 38 years ago that I shouldn’t expect my first important exhibition before age 50. I understood he was saying it takes years to develop skills and ideas worthy of a show. But nowadays, students leave their formal training and immediately want a gallery and fame. This, coupled with an art industry that is more about marketing and making money than a real understanding of what the creative process is about, makes navigating all that much more complicated and superficial. I feel that my best work is yet to come and feel that, in the pursuit of art, experience creates depth. But now my age is a hindrance as the market place looks for the next big thing coming out of their exclusive collegial pipelines. So now like years past, finding the resources to continue to make my art feels so very familiar. But we must continue our struggle. 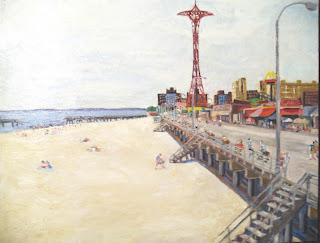 KIRPAL GORDON: Although you are a native New Mexican, as long as I’ve known you, you’ve lived in the Red Hook section of . Was this by design or accident?

RICHARD GINS: I guess some of both. When I lived in , I was so energetic and wanted to create and connect with other creative people to compare notes and collaborate. New Mexico definitely has many creative people and a long tradition of regional art as well as links to the New York School that goes back to the 1920’s and 30’s, but everyone there was so spread out with no real connecting point. So I spearheaded the first artist living/studio building in downtownAlbuquerque; a not-for-profit arts organization/center; and a not-for-profit performing arts organization/forum. I was using up more energy than I was getting back so I moved to NYC. When I moved I did have a lead on a temporary studio sublet on the edge of Red Hook. I miss the clear light and big vistas of NM but the waterfront in Red Hook Brooklyn did offered me clear light and a view of the horizon.  When I found an abandoned firehouse there, I knew this small vibrant beach style community was going to be my home.  I also enjoy painting outside from the landscape with my french easel and have made paintings on the waterfront in as well as in where I have a house for many years.  I have always been innately urban and needed to be in a more challenging environment artistically and one that offered more energy and opportunities in return. has surely offered me this. 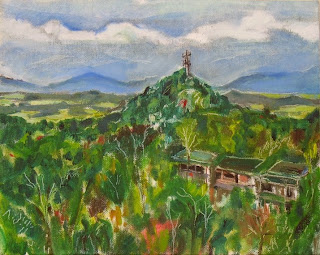 KIRPAL GORDON: How have your philosophical interests changed your approach to visual art?

RICHARD GINS: My interest in philosophy, religion and the esoteric schools of spiritual transformation started me on a journey years ago to “know thyself” and to try to understand reality and what the “creative process” is really about. Most of my work is about discovery within a creative process and the content itself in many of the works speaks to this mystery with metaphors of masks, windows and other suggestions of an inner hidden world. Picasso taught me so much about creativity. His understanding that “it’s not what you are doing but how you are doing it” gave him the ability to transcend the medium and express his inner power as a creative man. He confirmed my experience that the key to enter the creative process is the “risk” we take of not knowing where the journey is going and making the connection between creation and destruction as part of the same process. These ideas prompted me to explore various media (photography, video, writing, community organizing, social problem-solving, inventions, etc) all of which are connected in this non-linear, organic creative process. Most people accept the assumption that art is inevitably part of defining the creative process but this vital life process transcends making art and becomes the process necessary for our spiritual development. If one does not make this separation, then a person’s creative possibility depends on whether they consider themselves an artist or not, or feel they understand art or not. And just because a person does call himself an artist, it does not equate with creativity, consciousness or level of spirituality. It is not until we begin from the premise that whatever work we do in life, it is either done creatively or it’s not; whether we take risks in our lives or not; whether we are willing to destroy that which is limiting and familiar to us in order to find something new that has the power to expand and transform who and what we really are. This is my work as a man and as an artist and I feel I must share this vital understanding with other if we as a collective are going to reach a “critical mass“ capable of changing the destructive path we are on. I hope to finish a book I’ve been working on for many years about the creative process. 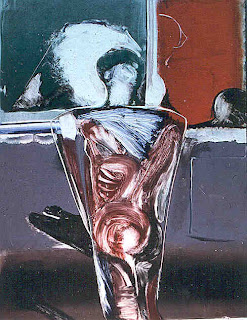 KIRPAL GORDON: How do Giant Steps readers find out more about what your work? photo by Bernard McWilliams
Posted by Kirpal Gordon at 6:40 AM