Caught by Surprise: How I Taught Myself to Write by Genevieve Maalouf

Learning how to learn was something I had to discover. Without it, I would not have learned how to write in my own voice. Like most of my peers, I entered my first college composition class at odds with, yet clinging to, the five-paragraph formula (say what you’re about to say, say it, then tell us you told us). I delivered little of my own views and nothing in terms of a personal style or level of persuasion. To be kind to my high school English teachers, their writing prompts did not inspire my imagination. Hence, told over and over I was a bad writer, I agreed.  Until now.


Nevertheless, my first essay, the worst of the four I would write over the fifteen weeks, was not very imaginative. Despite the solve-it-your-own-way originality of the “problem-posing” Freire-esque assignment---convince the class that your classmate is an asset to us---I approached it with a predictable, pre-fabricated, fill-in-the-blanks mindset driven by fear. I was accidentally blessed to have two student interviewees because I got so much better in the second interview, though I would make plenty of mistakes in grammar and punctuation in each essay that I would soon learn to self-correct. Worse than the mistakes, I was not yet the author. I had no author-ity for I did not witness my experience of these peers; I merely reported data. Consequently, I uncovered only three of the four hidden challenges in Essay 1: how to ease out of one’s comfort zone, build real rapport with a peer and develop confident interview skills. The final challenge, to celebrate the gifts and talents of one’s peer in persuasive paragraphs, remained obscure. Yes, my people skills helped open a floodgate of material for rapport came easily; the SWOT approach framed the interview most efficiently; both students poured out so much candid, enthusiastic information which I dutifully recorded. However, I could not fit it all into the restrictions of the five-paragraph container I was still focused on (along with the grade) at the expense of engaging readers. Until Essay 2.


Essay 2’s challenge was to increase our people skills by moving the interview from peers to adult service providers at the university and celebrate their service and talents in persuasive paragraphs. I feel proud to have broken out of my comfort zone about approaching adults who I admire, and my interview skills and level of rapport deepened. I enjoyed the chance to write on something I had so positive an experience of. I interviewed a student and a "real adult" who worked behind the desk at the library. Now I was no longer reporting or repeating facts; I was digesting and shaping them into a point of view.  Although the essay persuaded, it did not evoke my subject’s true colors. I still lacked the finesse to stimulate the reader’s imagination.  Until I got the hang of the journal.


Although I initially resisted it, the daily journal assignment birthed my critical skills, and from an increased confidence in analyzing data, I grew more creative. Five times a week I sat down and wrote a summary of the class sessions and the week’s readings that was chronological, complete and evocative followed by a critique of the subject matter. Walking the tree-lined path from dormitory to classroom to class, I recalled that I had last written a journal back in seventh grade, and that I never volunteered to read aloud in the systematic chaos that was my high school because unless one’s opinion was the teacher’s opinion in a higher pitched voice, it was wrong. I told myself that college was going to be different. I was going to attain confidence in myself and improve my writing. So when the second class began, a number of my peers volunteered to read their journals, and I, too, raised my hand. I would have preferred to read third of fourth, but called on first, I had no choice. I read slowly and uncertainly. Everyone responded positively and no one gave criticisms, but I knew my classmates were too polite. KP, on the other hand, still very supportive, brought to my attention the flaws in the journal entry and the missing pieces in chronology and critical analysis. Even though I was shaken up by reading my writing aloud followed by feeling sheepish for misjudging the assignment, this proved to be the first of many discoveries. Determined to write the journal that KP was aiming for, I wanted to have at least one entry I could feel proud of. This meant completely letting go of my fears in self-expression and in reading to others. To my surprise, that didn’t take very long to achieve. I read aloud from my journals, and the responses got better and better. Such positive feedback caused me to take the assignment more seriously. It was the first time I ever felt confident in anything I wrote. Nevertheless, I still had something missing. Then, eureka: My sixth journal entry was the breakthrough! Perhaps because of my constant practice and/or the astute feedback from others, I had managed to weave evocation, chronology and completeness with a critical appraisal that cited exact examples. I got inside my listeners’ heads and stimulated their memories and imaginations while persuading them to see it my way. KP and the class bragged all over it. The individual pieces came together in a new Gestalt. I could not believe I had finally written a complete entry in which every word worked. Later, I realized that the journal’s 75 summary-critique assignments incrementally helped me organize my thoughts and feelings into a coherent whole. However, I was unable to produce this in a hand-in assignment. Until Essay 3.


Essay 3 involved writing in response to six readings that focused on the contradictions and malfeasance of the American university industry. I became aware of how each author demonstrated a distinctive voice, whether comical, provocative, confrontational, metaphorical, urgent or indicting. I proved to myself I could get readers to understand my perspective and form an opinion of their own. I also grew a lot better in quoting from these sources to support my own thesis. Clearly, the learning challenge in Essay 3 was to translate the SWOT mindset of an astute interviewer into that of an astute reader of essays. It gave me my greatest opportunity to develop rhetorical strength: anticipating the counter-argument to back up my own argument. By interpreting the antithesis to my point of view, I learned how to reduce its impact and give the reader a wider, more inclusive perspective. I was really digesting data and synthesizing ideas. Nevertheless, I had not yet grown fully into my writing voice. Until Essay 4.


The wide range of the seven writers I read challenged many issues regarding my sense of personal identity. For example, convinced that the way to create an identity that stood out against social conformity was to detach and separate oneself from society, I became confused when Alan Watts claimed that we should leave our egos behind us and come to the realization that we are all bounded together.  I felt this view contradicted Emerson and Thoreau, but then I gave it more thought.  Transcendentalism never stated we had to dispatch ourselves from society, only that we shouldn’t feel compelled to conform but to follow our own drummer.  Both Martin Luther King Jr. and Walt Whitman celebrated a cosmic sense of identity that brought to the surface my own small mind and helped me grow into a more open person. Plato furthered challenged me to break out of my shell of ignorance and caused me to question how I see the world.  After reading his cave allegory I was left in a state of contemplation and shock. Frederick Douglass toppled the greatest impediment I could face: going against social laws and norms. His determination to learn how to read and write shaped his identity into a leader who refused to give up.  The biggest way to go against a conforming society, though, is acceptance of oneself, which Gloria Anzaldua had proved when talking about her childhood struggles.  Her standing up for her Hispanic heritage and sexuality in a society that shamed her for both gave her the identity most people strive for: being proud and independent from society’s beliefs. This notion returned me to King’s proactive message that society stands stronger when we all express our identity without fear and Whitman’s message that nature is the puzzle we all fit into. When I caught on that we live in a multi-dimensional world, I felt like a new person. At first I had been left with shattered ideas, but when I finished reading all of them, my shattered pieces glued back together into a new understanding. By not being afraid to confront data that threatened my outlook, I found my writing voice.


Learning is an amazing gift that only some of us fully understand.  Most people only focus on the grade, but I learned that the grade doesn’t reflect on how one learns.  To quote my greatest inspiration: “Education thus becomes an act of depositing, in which the students are the depositories and the teacher is the depositor.  Instead of communicating the teacher issues communiqués and makes deposits which the students patiently receive, memorize and repeat,” (Friere, 1). This class has taught me how to learn.

Fortunately, my search for who I am did not end when this class did. My initial goal in college was to devote my life to my favorite form of expression, that is, music specifically from the Romantic era, which has always been a “go to” when I needed to just be me. How could I not spend the rest of my life studying music of the composers who inspired me? As it turns out, one need not to major in music to do so. I found my music major status put me in the company of hyper-competitive students who were willing to sabotage each other to boost themselves, an unhealthy environment for those who want to learn for the sake of learning. Math, on the other hand, has a different atmosphere: everybody encourages learning together because what better way to learn than from each other? This couldn’t be a better fit for me, especially because my passion for math is just as strong as my passion for music. Although majoring in music injured my appetite for it, majoring in math enhanced it. Not to say that one major is superior to another, but rather, they gear towards opposites. My favorite consequence of the switch was finding another puzzle piece to who I am and what it means to be me. 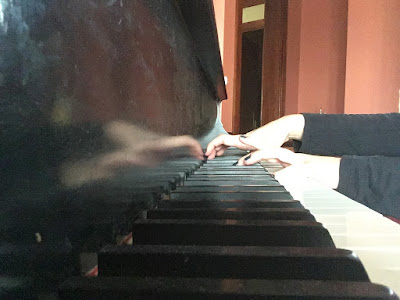 
Anzaldua, Gloria. “How to Tame a Wild Tongue,” Web.


Plato. “The Allegory of the Cave,” Web.


Watts, Alan. “The Book: On the Taboo Against Knowing Who You Are,” Web.

Posted by Taking Giant Steps Press at 4:06 AM