Is Feminism the New F Word? From Resistant to Responsive by Lola Solis 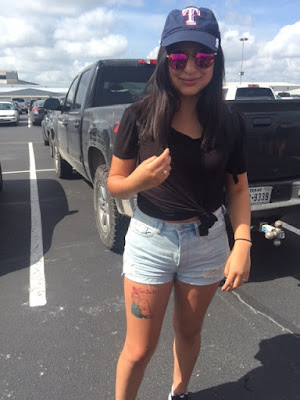 “That’s not lady like,” my grandma scolded me as I sat without crossing my legs at seven years old.


“Do you expect boys to respect you dressed like that?” my fifth grade teacher asked regarding my outfit of skirt and knee high socks.


“You’re showing too much skin,” my dad stated when at sixteen I wore a demure blouse to a birthday dinner.


“You’re just asking for it with that dress,” I overheard a group of men saying as I walked into the bar on my eighteenth birthday.

These comments repeat themselves in my head like a broken record. As a young girl, I grew up hearing these statements so often it that became imprinted into my mind. Living in Allen, Texas, was like living in an inescapable bubble where my actions hardly ever went unnoticed, especially if they strayed from typical Texas conservatism. I remember walking into my high school office during my senior year to check in and receiving looks of absolute disgust at my brand new Rosie the Riveter tattoo from the Caucasian secretaries at the front desk. They looked at me like I was some animal, and I couldn’t help but laugh to myself at their dismay. Purposefully, I lifted up my dress past mid thigh so they could get a complete look at it. Horror struck their faces as I danced away. I made sure they knew I was proud to be a feminist. In spite of Rosie the Riveter being the heroic image of the 40’s that allowed women to work, the secretaries remain politicized by their own sex and unable to realize the historical importance of her being the transformational image of American iconography.

Some women can escape social conformity and become conscious of the incredibly sexist, patriarchal society we live in. Others are trapped and are incapable of realizing their true identity because they are the product of someone else’s identity formation. I fortunately have been able to remove myself from the worldwide view of women that objectifies and degrades us. Through years of breaking barriers that prevented me from formulating my own thoughts, identity, and beliefs, I’m able now to shape my own experience and to empower women as they have empowered me. Why is it that some women are able to see their political potential and others only see envy?

Ever since Betty Friedan’s Feminine Mystique used the identifiers feminist, feminism and feminists, these words have gained negative connotations. When I began to voice my opinions and argue back to conservative views that inherently put down women, I and many others who wished to combat the patriarchy obtained a sort of nickname; we were called the FemiNazis. I didn’t get tough by allowing a petty nickname to stop me from fighting for women, but the fact that people are comparing us to murderers who assisted in a genocide against Jews is unfathomable. Why are people so afraid of equality? Is this because we only earn roughly 75 cents to a dollar for doing the same job that a man does? Why so mute if not to suggest that silence equals acquiescence? Are they so reluctant to not see their enlightened self interest ought to have them representing equal pay as workers? I am haunted day and night by the resistance to delivering equal status for all. While women have been objectified for centuries, and men have always been the ones to issue power, I can somewhat understand the resistance to changing what some people may call normality. Just because it is tradition doesn’t make it just. For example, slavery was an American (peculiar) institution until 1865. I do not seek to diminish the road to freedom that African Americans were on, but sometimes I wonder about the American grain. Do we want women as property or do we want women as persons? I am sick and exhausted of this war against women and I will not stop until it is over.  Breaking social and economic gender barriers is not a job that can be accomplished overnight, nor can it be done alone.

I never really understood the power of voicing my opinions and standing up for my beliefs until this past year when old friends from high school contacted me to let me know how much I inspired them. One student wrote: “I respect you embracing how you are different from others from how you dress to your interests…I love that you are firm on your beliefs. I love how you strive really hard for the social equality of women as well as overall feminism. I love that you are trying so hard to make social change and make you voice be heard” (Small, par. 2).

Although one often hears about activists like Malcom X and Martin Luther King, Jr. and their leadership in civil rights, one never really believes that one has the power of doing the same. This is the mindset that is hindering society from moving towards gender equality. As smart and capable as I know I am to lead a movement, I need help from fellow individuals who experience the same passion and drive for justice as me. In “Letter from Birmingham Jail,” King states, “We know through painful experience that freedom is never voluntarily given by the oppressor; it must be demanded by the oppressed” (Par. 11). By demanding that we break gender norms and fight back anti-feminist comments, we are following King’s nonviolent path to social change. What we need to bring to light is how absurd it is to be so terrified of our sex. Does a women scare us so much, that we feel as though we must do everything in our power to keep us from becoming equal to us? Like King asks his readers to imagine what we are supposed to tell our colored children about Jim Crow, I wonder what do American mothers tell their daughters. As Gloria Anzaldua puts it, do they tell them to tame their wild tongues? The tongue is to feminism as the non violent sit-in is to the Civil Right’s movement.

Many men and women have claimed that my wild tongue is intimidating and “unattractive,” but underneath what they are saying is the acknowledgement that I can be articulate. I am strong, independent, and verbal about issues affecting women and I will never give in to intimidation by men and counterproductive strategies by women. If we want to destroy the walls that separate us, then we must stand strong and continue to bring to light the issues that have been pushed aside and ignored by politicians for decades.


“We know how to survive. When other races have given up their tongue, we’ve kept ours. We know what it is to live under the hammer blow of the dominant norteamericano culture. But more than we count the blows, we count the days the weeks the years the centuries the eons until the white laws and commerce and customs will rot in the deserts they’ve created, lie bleached…Chicanos will walk by the crumbling ashes as we go about our business. Stubborn, preserving, impenetrable as stone, yet possessing a malleability that renders us unbreakable. We…will remain” (Anzaldua pg. 85)


Despite the various negative connotations of the word feminist, I will never stop identifying as one. Although it takes many hits, feminism is actually an indication of progress. In Susan Faludi’s Backlash: The Undeclared War Against American Women, she states, “In national surveys 75 to 95 percent of women credit the feminist campaign with improving their lives, and a similar proportion say that the women's movement should keep pushing for change” (Faludi Par. 23). If women are benefiting from the feminist movement, why stop? 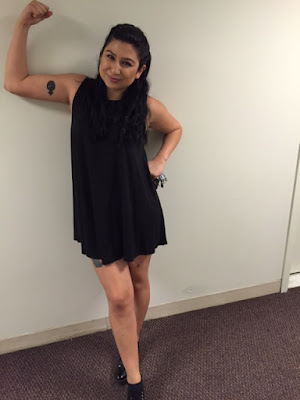 Posted by Taking Giant Steps Press at 5:16 AM