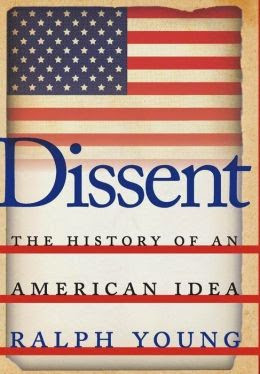 “Our textbooks on political science and economics are obsolete. Our nation has been hijacked by oligarchs, corporations, and a narrow, selfish, political, and economic elite, a small and privileged group that governs, and often steals, on behalf of moneyed interests…During this plundering we remained passive, mesmerized by the enticing shadows on the wall, assured our tickets to success, prosperity, and happiness were waiting around the corner.” ― Chris Hedges, Empire of Illusion: The End of Literacy and the Triumph of Spectacle

This review starts not with a quote from Ralph Young’s Dissent: The History of an American Idea, but from one of the most vital political analysts of our time addressing a potentially irreversible crisis happening right now under our very noses: the suspension of dissent as a corrective and cyclical mechanism against the prevailing status quo. Of course as Dissent abundantly shows, the composition of both the privileged and dissenting class changes dramatically with each historic engagement. Less clear is whether the power structure will succeed in evolving an ever-more repressive paradigm on the way to stifling dissent altogether.

In fairness to Young, his book is (as the subtitle fairly reflects) a history. So this reviewer’s disquiet precedes the reading of this expansive and, in many ways, impressive account. Nonetheless in other ways, Dissent reads like one of Hedge’s superseded text books, perhaps what one might encounter in a 200-level survey course in a university Political Science class. When the forest is ablaze, the last thing one wants to be handed is a field guide to its pristine flora and fauna. How about a red phone to the forest fire-fighters instead?

At the end of the day, history is at the end of the day. Flames lapping at your heels? That’s a whole ‘nother campfire. I confess to first flipping to the book’s conclusion where any sense of urgency might best be expressed. The book is after all a 2015 edition, a full two years on from the tragic ‘death by prosecutorial mischief’ of Aaron Swartz, easily his generation’s Abbie Hoffman. Hedge’s 2010 book for all its portent could not have incorporated that cruel injustice. Yet Dissent makes no mention of Swartz; nor of electronic civil disobedience pioneer Jeremy Hammond, sentenced in 2013 to ten years in prison for leaking intelligence firm Statfor’s emails which detailed money laundering and other improprieties. Indeed there’s no mention of hacktivism at all. Wow. Tales of yesteryear indeed. The book concludes with this:

Never mind the comma splices. I’m thinking wan, pedestrian and textbook-safe; obsolete, as Hedges might say, before the ink dries. There are kids in jail right now, others in early graves over this whole dissent business. Historical remove aside, the nation’s commissioned thinkers in this space have an obligation to meet these dark times with something that reaches beyond banal pieties.

Equally dubious is the author’s introductory assertion that we can expect more of the same because, well it’s been that way for four centuries. Here’s Young:

“In a century that is only in its second decade, we cannot foresee the scope and extent of future protest movements, but if the history of the past four hundred years has taught us anything, it has taught us that dissent and protest in all its numerous manifestations is not going away and will continue to shape the United States.”

Oh really? Suppose modern surveillance techniques and perfected manufactured consent has in fact delivered us to a Panopticonic dead-stop? What we thought was an endless cycle may turn out, in the final analysis, to be a ratchet converging on its terminal click.

So much for my book-ended beefs. Perhaps I overreact with the jealous prerogative of the present moment. Are we wrong to expect more here-and-now hand-wringing from a historically focused account? On to the middle part, the history stuff, which is really quite fascinating and where Young exercises his true vocation. In fact, he excels in story-telling mode.

The odd thing about dissent is the illusion of its perpetual virginity, which Young ably conveys—how it always feels peculiarly impudent to the status quo each time it is invoked. During the western expansion of the 1870-80s period, myriad groups meet near-identical resistance, from Chief Joseph’s Nez Perce to Chinese coolies, to the Mexican resistance group the The White Caps. Then later, Americans of northern and western ancestry express alarm at the influx of Eastern European Catholics and Jews.

The fundamental fear never seems to abate and typically manifests in a twofold manner: one, there is a sense that ‘true American identity’ is being hopelessly diluted by the new strangers and two, a selfish determination resists sharing the wealth and allowing economic parity and enfranchisement. Sometimes the status quo’s fear is not ethnically-based at all, but rooted instead in cultural or even psychological factors.

Speaking of the 1950s’ consumer explosion and general exuberance born of full employment, Young also points to the dark Cold War imaginings fanned by McCarthyism: “Whereas the 1920s featured a conflict between modernism and traditionalism, the 1950s was a schizophrenic age split between confidence and paranoia.”

At other times, dissent is not a unitary expression issued towards a singular injustice. In the chapter Progressives and Radicals, which deals with the turn of the twentieth century, Young details a complex milieu of, “political, economic and social problems caused by rapid industrialization, urbanization, and mechanization” giving birth to a “range of responses”. Much of the dissent is of a reactionary cast, as opposed to a bold, progressive bid for a heretofore unclaimed promontory, as a loose and disparate coalition of farmers, small store owners, capitalist reformers, etc. weigh in against growing wealth disparities that are robbing their hard-won gains. Not unlike our own era, political corruption is rampant and wealth distribution is dramatically skewed (In 1900, the top 10% owned 72% of the nation’s wealth). The middle was losing ground. Sound familiar?

In Dissent in the Age of Reason, it’s already clear by 1720s-era Colonial America that Enlightenment ideals and the Age of Reason are destined to clash with slavery, Native-American relations, women’s rights, the more rigid strains of Calvinism and Empiric mercantilism. By the end of this chapter (around 1740), Young points out that while the preponderance of, “demands fell on deaf ears…they did help raise awareness…furthermore, dissenters were aware of each other. When one group spoke out against injustice, it set an example for others to speak out.”

While this emboldening process assists in normalizing the righteous dissent of the oppressed throughout the centuries, the individual battles never seem to get easier. At least past dissenters could count on hospitable enough terrain from which to mount their subversive aspirations—from the Suffragist movement of the post-Civil War era, to the Quaker pacifists of World War One, to today’s Tea Party. One is always left hoping the war is not over altogether. For one thing, there’s unfinished business. Edward Snowden could use a plane ticket home.

But then, maybe the Mugwumps nursed similar anxieties. The last battle will not announce itself as such. One also fancies Fighting Bob La Follette devising a way to fight around today’s thicket of drones and eavesdropping devices. Might human ingenuity have its limits though, particularly in the face of some oncoming Terminator?

Indeed dissent has been, as Young insists, “one of this nation’s defining characteristics.” However definitions change. Wars on International Terror mission-creep into Wars on Domestic Dissent (if the former, and not the latter, was even the original intent, a debatable point.) Despite its penchant for repetition, history, today, may offer the least instructive value to the present moment than at any other time in, well, history. Let us hope, my fellow post-TPP Americans, the circle stays unbroken. To expand upon a certain historian: We need to dissent if we are to avert a permanent breach.
Posted by Taking Giant Steps Press at 6:32 PM