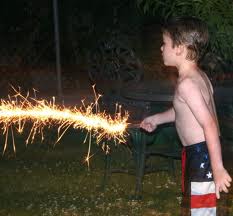 When I was a kid growing up in Queens during the early 1960’s, I used to look so forward to the fourth of July. Mr. Forgione, the neighbor living directly across the street from us, would drive his Cadillac to the end of our dead-end block which was adjacent to acres of empty lot, a perfect location to simulate a war zone. Lit cigar positioned in the corner of his mouth, he would sanctimoniously exit his vehicle and walk in what appeared to be slow motion towards the rear of the car. We watched impatiently as Mr. F took his sweet time nonchalantly sorting through the dozens of keys on his filled to capacity key ring, feeling for the one which would unlock his trunk, finally revealing the treasure chest of illegal thrills. He pretended to be bored with the annual ritual, ignoring the yelps of excitement coming from all the neighborhood kids who marveled at the vast amount of explosives he generously shared with us year after year. It was the one day when my dad freely handed over his cigarettes to me so I could light the fuses of whatever fireworks I got my hands upon. Every now and then when he wasn’t looking, I would sneak a drag because, somehow, it made me feel cool.

Our block put on quite the fireworks display. Although we may have been a far cry from Grucci and the extravaganza staged by Macy’s, we believed it was most spectacular. The end of our street looked like a scene out of World War II. Bottle rockets, sky rockets, cherry bombs, sparklers, helicopters, and mats upon mats of firecrackers filled the sky with showers of shimmering light and thunderous booms and bangs. I used to think Mr. Forgione had to be a millionaire to be able to afford the infinite supply of fireworks he religiously donated to the 137th Street Independence Day Celebration.

I distinctly recall how on the morning of every July 5th, my friend and neighbor Bob Donohue would waddle up to my house and ring my doorbell first thing in the morning so we could scour the fields looking for duds. We collected the hundreds of firecrackers that didn’t ignite the night before, took them home, emptied the gunpowder and built our own super bomb. Curious, inventive, naïve and stupid, one year we stuffed the explosive dust into a glass jar along with bits of homemade shrapnel, which contained nuts, bolts and pebbles. We then attached a long fuse, and after our day-long project was complete, we returned to the sight of the previous night’s battleground, and placed our concoction inside one of the huge cement cylinders that sat like a mysterious structure in the middle of the lot, reminiscent of an ancient Sphinx or Stonehenge.  One day in the future I learned the weed-filled acres would soon be occupied with new roads and homes and the mysterious structures were nothing more than dry wells. We assumed it was a safe distance away from the homes bordering the lot. Experiencing the thrill of creating some mischief, we lit the fuse and ran for our lives. Standing at the edge of our street, we watched and waited. From where we stood, we could barely make out the sizzling of the slow burning fuse, and then suddenly we heard the loudest explosion echo from inside the walls of the dry well and immediately following the blast, I felt a sharp pain radiating from my shin. Not knowing what had hit me or bit me, I looked down to see blood trickle down my leg. My injury was caused by a fragment of the shrapnel that had been launched from our homespun weapon. “Shit!” I yelped in anger, “How could I be so stupid?” I hobbled home, disinfected my wound, and applied a bandage. Bob and I went back to the dry well the next day to see the extent of the damage caused by our little bomb. A few of the tiny screws were imbedded into the once grey cement walls that had been blackened by the blast. When I think about how such an amateurish, makeshift concoction assembled by two stupid kids could cause such harm, I could only imagine the devastation brought about by the real thing. 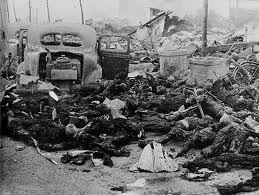 Say or think what you will, but I am no longer a fan of fireworks or the Fourth of July. Let’s face it, fireworks represent the “bombs bursting in air,” and to me, bombs only mean bloodshed, death and destruction. I thoroughly understand how Independence Day is supposedly a celebration of our country’s independence, yet at the same time I wonder about how free we really are. Granted, compared to the rest of the world, I guess we can safely pretend to be free. The question is, from what and from whom have we been liberated? According to the pages of history, courageous souls from England flocked to these shores seeking religious freedom. Once they got here, they encountered the American Indians, who as far as I could tell, had it pretty together, spiritually speaking. They saw and revered the wondrous workings of nature. Along came the white man with his Monotheistic God, his Christianity, its doctrine and its many variations, and before long, Native American spirituality went out the window and religion set its nasty claws into the soil of the brave new world, setting the stage for rape, bloodshed, greed, deception and slavery; all Godly behavior I’m certain!

Not for anything, but the biggest culprits of unrest and global violence all stem from the three religions that emanated from the god of Abraham; Christianity, Judaism and Islam. From their inception to this very day, people are dying unnecessarily over religious differences. Why is it that absolutely no blood has ever been spilled over Eastern religions such as Buddhism or Hinduism? To me, all religion is delusional and unproven, but if I had to choose one, it would certainly be one that propagates non-violence!

So here we are in the 21st century, in the land of the free, the melting pot of race and religion, where government is deceitful and people are divided. When I see the flags waving and the fireworks exploding on this Fourth of July, I have to ask myself if Americans really believe they are as free as they think they are. Admittedly, I agree that up until now, our freedoms have been better than those of most other countries around the globe. We do not live under the reign of a mad dictator…yet! As far as I’m concerned, freedom means not having to live in fear, judgment, prejudice and anxiety, yet we live in a nation where millions pop anti-depressants daily, where people are judged by race, creed and sexual preference, and where churches are full of those who claim to be believers because they live in fear of the consequences of a place of eternal torment, Hell! We drive along roadways where there are hidden cameras at almost every intersection waiting to catch an unsuspecting driver streak past a yellow light. Technology makes it possible for government agencies to pinpoint our every move through the use of our cell phones, credit cards and E-Z passes. We are scanned, screened and body searched at airports, sporting arenas and concert venues. I have read that as much as 53% of every tax dollar has gone to funding the wars most of us are opposed to. Try and stop paying your taxes and see where that lands you! We live in a nation where politicians continue to lie, cheat and live adulterous lives, yet because they have been initiated into the “club,” their futures are secure with comfortable pensions and lifelong medical coverage, while the citizens of the country can’t find jobs with salaries substantial enough to meet the high cost of living, have lost their life savings due to the fraud on Wall Street, and can’t afford medical insurance. A rumor that Social Security may no longer exist for future generations is a disheartening thought to say the least. Are we really free?

It has been said that “The truth shall set you free!” I guess the answer is to find the truth. The one truth we all can be sure about is that we die. Where we go after we die is all speculation and in many cases wishful thinking. So basically, all we can be sure about is that once we are born we are on the inevitable path to our death. That should be more than enough to make humans realize we are all equal. No one is any better than the next. The simple notion of our mortality should be reason enough to squash our egos and inspire us to live as one. I think if and only when we are able to come to that place, we may finally be on the path to freedom. Until then, let’s all take a long hard look into the mirror and face the sad truth…we just pretend to be free.