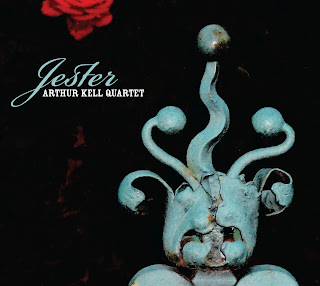 KIRPAL GORDON: Seeing you and your quartet (plus one) play last week at Cornelia Street Café, I was knocked out by the performance.  I had last seen your band three years ago, and as I thought about the two shows, I found these two quotes on your music:
“At no point during this amazing concert did the audience doubt that tremendous art was being performed here. Arthur Kell is an excellent composer, instrumentalist and band leader. Although his compositions sound gentle, they have exceptional bite. The quartet sounds like it is cast from one sound...Both the ballads and the quick, concise pieces are convincing with their ingenious complexity…in some magical way they are together, rhythmically and harmonically...true musical mastery, as is only rarely heard.”
“After their glorious appearance, the explosive Arthur Kell Quartet from New York has a new group of fans, many of which left the hall with glowing eyes. Bassist Kell is an impressive soloist, but above all a very expressive composer well-versed in music history…the amazing thing is that even if it gets complicated and sophisticated, the music overall is still accessible, and radiates serenity, even with quicker pieces.”
The first quote, from Peter Bastian in Badische Neueste Nachrichten (Karlsruhe), feels so much like last week’s show, even with Mike Blake on tenor sax sitting in. It was deep magic.  The second quote, from M. Scheiner in Mittelbayerische Zeitung (Regensburg), aptly describes the impact of your performance at the Jazz Gallery in 2009, a radiant serenity.  Would you agree?  Both events were CD release parties, yes?


ARTHUR : Yes, both concerts were cd releases: Jester most recently, and Victoria: Live in Germany in the ’09 show. For me, the music opened up a lot more on the more recent show – we reached that place where everything is musical and happens almost effortlessly and there isn’t much distance between intent and execution. But after many years of performances, I’ve also learned that what I’m experiencing at the time is not necessarily what is happening in the music or for another listener. Even if we play just two sets on a given night, Mark Ferber (the drummer on both gigs) and I will often have completely different takes on which one was stronger. Recording sessions can be even more telling. I love the recording of “Ijinna” on my second cd, Traveller. But it was one of the first tunes we did early in the day and the entire time we were doing it I kept thinking that it was lifeless and dirge-like. Not so! It was so in the zone. It’s just one of those things that you have to remember about life: what your mind is telling you at a given moment is just a point of view that even you may not agree with. All I can do is do my best and hope that the listener is getting something from it. 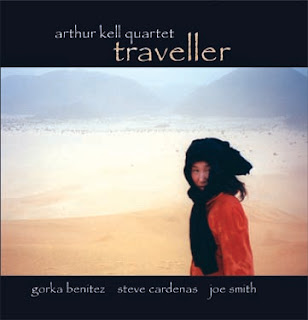 KIRPAL GORDON: I’m intrigued with the cover art of Jester as much as I am the cover art to Traveller. The image seems so emblematic of the music.

ARTHUR : Itinerant musicians traveling from town to town for live performance, it’s an age-old role. But musicians and artists generally occupy a precarious and profoundly interesting spot in society. They can be adored, reviled, distrusted and considered indispensable in short order, depending on the audience. They can occupy both the highest and the lowest rungs of societal honor and respect. That’s why the jester image made so much sense to me. Although their age has passed historically, they represent the same remarkable and challenging role. If you dig past the common and shallow idea of jesters as silly people, you find out that jesters were present world-wide and in every conceivable role at the center of society: entertainer, closest friend of the ruler, powerful political advisor, idiot, comedian. In many situations, they represented free-speech in a constricted society. Because their social standing was the lowest, they could say what others could not say. They allowed a king and a court and a society to develop its ideas after listening to the “worthless fool.” They were like imagination in action, with all of the curiosity and questioning perspective of the person who is not part of normal society. It’s hard not to draw a line between artists of today and jesters of yesteryear. I feel like a quirky, weird, imaginative, curious jester. If my music captures that spirit then even better.
Also, there’s the fact that the jester on the cover is an iron jester. In many societies, blacksmiths are feared and shunned. An iron jester is a reflector of society created by an artist using a hell-like fire. To make it even more diabolical, he’s also kind of cute and very funny. He’s anything your fear or hope could create. 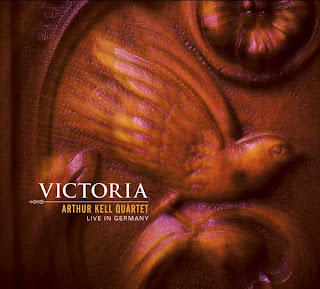 KIRPAL GORDON: You’re onto something about the jester’s gestures. Wavy Gravy (a/k/a High Romney) said he took more than a few beatings when he dressed as a fool back in the Merry Prankster era but never got roughed up playing the clown in America. Back to your music, between the release of Jester and Traveller is Victoria---Live in Germany, of which Matt Marshall wrote in Jazz Improv Magazine, “Everything that modern jazz should be: vibrant, challenging music from a band so tight within its group dynamic and so confident in its individualistic chops that every movement is a lively step forward. The recording retains all of the energy of a kick-ass live event and should receive serious album-of-the-year consideration.” All About Jazz said, “...exquisite solo moments, but the music’s lyrical bent and the quartet’s collective talent for nuance is what brings this disc home...the sense that these are stories never wanes...the results are very, very good." Something Else accused you of being “a no-nonsense bass player with a lot of range.”
How do you stand on all of these charges?

ARTHUR : Thankful! Thankful that anyone is understanding my intent. 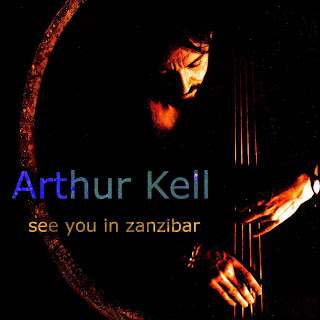 KIRPAL GORDON: What’s the story behind your earlier CD, See You In Zanzibar? Is that a pun on Bing and Bob or is this the result of your own travels through Africa with Thomas Chapin? You had played in one of his great quintets, Spirits Rebellious?

ARTHUR : It’s all about travel with Thomas and a metaphor for our lives and after. We spent a lot of time together starting in high school, really from age 15 on. More than anyone or anything else, he instilled in me a belief in extraordinary things. His sheer force of will and musicality and humor made me want to be a musician and capture the beauty inherent in life. He kept leaning on me to join him in Africa in 1997. I finally decided to meet up with him in Tanzania and flew out of New York expecting to travel together for two weeks. We were both Africaphiles and were hungry to be there. Through friends we arranged to meet on island (email and cellphones were uncommonly used back then). When my boat came in and we met at the dock, he didn’t look well. We barely left our hotel rooms for a week and then we got him back to the airport and he went home early. Long story short, he had leukemia and died a year later. The cd title is taken from the ballad I wrote for him. I love that track. We really captured something special, something he deserved.

KIRPAL GORDON: In addition to composing, band leading and touring, you are also quite the sideman around town, a bassist for an incredible range of players and projects. How long has this been going on?

ARTHUR : I’ve been doing sideman work as long as I’ve been in -- for decades. God willing, it’ll be decades more, I love being a sideman!

KIRPAL GORDON: I understand you’ve recently made some trips to .  And you’re doing some teaching of jazz there? Is this related to your study of yoga or mindfulness meditation?

ARTHUR : I’ve been once so far, mostly to Kerala. I’m going back this fall to teach electric bass at the Swarnabhoomi Academy of Music outside of Chennai for seven weeks. It’s not related to yoga and meditation and just came about through a musician friend’s recommendation. I’m excited to be there and working in a different environment for a change.

KIRPAL GORDON: With all the things you do, how did you ever find time to be an environmental activist for NYPIRG? I remember the heading on Good Morning America on ABC-TV: Arthur Kell On the Arthur Kill.

ARTHUR : There was about seven years there where I became completely consumed in that public interest work. I don’t know if there is any other way to do it well. I became a full-time activist and hardly kept up with being a musician. I never intended to get so involved but it was an incredible experience and a great way to see how New York City operates – from City Hall political hardball to community meetings on Staten Island. I learned so much about law, economics, organizing, public speaking and dealing with the media. It gave me a wide-angle view of society and politics and how change is affected. And it answered a call I had to make a very direct contribution to the community in which I live. But eventually I had to come back to music full-time. And when I did, my composing was a lot more interesting than it was before.


KIRPAL GORDON: So what’s going on in Bed-Stuy? Are there more jazz musicians and composers living in Brooklyn now than Manhattan?

ARTHUR : Bed-Stuy is an amazing area and living here just feels like a natural extension of all the years I lived in . It’s hard to believe it’s 32 years now in both places. Of course, I love all things Brooklyn. I was out here in Bed-Stuy and Crown Heights in the early 80’s when bars like Tiffany’s and Brownie’s and the after-hours joints were happening. Although it was long past Bed-Stuy’s jazz heyday, the crowds would be so into the music, they knew it so well. A couple of years ago, an older cat tried to get my attention as I was rushing off to a gig and trying to get my bass into the car. You know, the usual, “Hey I play music, too.” But he started running down the history of jazz in Bed-Stuy in the Fifties and it became obvious that he knew exactly what he was talking about: “Tommy Potter lived over there on Jefferson….” He went through Miles’ bands. Then he said, “Monk used to come out and do sessions right over there…” He pointed to a building just up the street.

KIRPAL GORDON: In the arc of history that this music has traveled, where do you see things headed now?

ARTHUR : To me, the music scene is much as it has always been: bursting with creativity and dedication and not enough places to play. There are musicians arriving in this city every day who are completely committed to their art. They will find a way to keep their music alive.

KIRPAL GORDON: How can people at Giant Step Pres blog stay in better touch with all of what you do?

Posted by Kirpal Gordon at 6:04 AM