Living History: An Interview with JAMES DRISCOLL, author of FLUSHING: 1880---1935 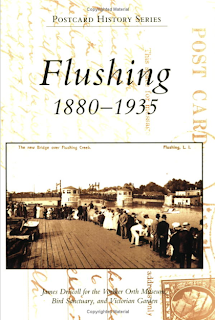 KIRPAL GORDON: I first saw your book, “: 1880---1935,” at the Voekler Orth Museum, Bird Sanctuary and when George Wallace spoke there last month on Walt Whitman.  As you may know, Jim, Giant Steps Press has many connections to , so please tell our readers about you, your involvement with the museum as well as the Queens Historical Society and how the book, published by Arcadia Press, came to be.

JAMES DRISCOLL: I taught social studies in the New York Public Schools for over twenty years and have lived in all my life. I started doing research at the Queens Historical Society about twenty years ago. I am also on the board of the Voelker Orth Museum. About seven years ago their executive director, Catherine Abrams, asked me to do a book about for .
KIRPAL GORDON: I was knocked out to read of the Flushing Remonstrance and the part played in the Underground Railroad during the Civil War.


JAMES DRISCOLL: has a wonderful history. Way back in December of 1657 the people of defied the Governor of New Amsterdam, Peter Stuyvesant, and allowed all men and women to worship God as they saw fit. The incident that brought this about was Stuyvesant's persecution of the Quakers. Although they were not Quakers, the people of issued a statement called the Flushing Remonstrance which may have been the first statement in defending this basic right. Stuyvesant did not give in. He continued to persecute the Quakers and the people who wrote the document. About two years later he heard that John Bowne allowed his wife who was a converted Quaker to use the Bowne House as a place to hold their meetings. Stuyvesant found out about it and ordered Bowne to leave the colony. Bowne went to and complained about Stuyvesant. The directors of the Dutch West India Company agree with Bowne and ordered Stuyvesant to change his policies. Almost two hundred years later the Quakers in , we believe, supported the Underground Railroad and helped slaves flee to .

KIRPAL GORDON: I found Chapter Two, “’s Horticultural Heritage,” particularly interesting, especially your remark that many of the trees in in and in originally came from nurseries here.

JAMES DRISCOLL: The first commercial nursery was started in was started in 1737 by members of the Prince Family. According to the Journals of Frederick Olmstead, Olmstead picked out trees in for . His buying partner was Samuel Bowne Parsons, one of the owners of the Parsons Nursery in Flushing. That was in the 1850s.

KIRPAL GORDON: Both the historical chapters and the geographical chapters on Broadway, Main Street, Murray Hill, Waldheim and Kissena Park really come to life thanks to the paintings, sketches, maps, photos and postcards you have managed to collect and comment upon.  What was it like researching this project?

KIRPAL GORDON: In your last chapter, “Changes in the 1920s,” you really sent me down Memory Lane with that postcard of the magnificent interior of the old RKO on Main Street and Northern Boulevard.  Will that ever be restored?

JAMES DRISCOLL: The RKO Keiths was landmarked in its entirety but the late Donald Manes had landmark status withdrawn from the auditorium. The best we can hope for is that the building is restored preserving the sections that are still landmarked: the ticket lobby and the grand foyer.

KIRPAL GORDON: In an earlier blog post, I asked Jason Antos, author of Whitestone, about curbing overdevelopment, and he said, “That is up to the people, our local politicians and zoning laws. The laws have to be enforced and perhaps changed so that Whitestone can retain some of its small town feel.”  Do you think this is also true for ?  What would you recommend that citizens do to help preserve ’s unique history?
KIRPAL GORDON: How can folks purchase your book and stay in touch
with what you are doing?

Posted by Kirpal Gordon at 5:32 AM