Passion’s Dark Side: Roeg’s WALKABOUT vs Wertmüller’s SWEPT AWAY by Samantha Storms

Within the depths of the most intimate, sensual parts of our being exists a primitive understanding of ne of the rawest emotional sensations humans cultivate: carnal desire. Lust, that overwhelming need for venereal feeling and contact that grows deep within our core, fosters life as we know it. Nestled deep within the pits of our bellies, sex is at the basis of what makes us human. It is sex that creates, rebuilds, and nurtures. It is sex that is at the pinnacle of enjoyment, of gratification, and of pure and uncontrollable ecstasy. However, it is the ability of this fundamental element of love and affection to destroy everything in its path that has fascinated the love sick and sane alike, and much like the unforgiving heat of the Australian Outback and the merciless waves of the crashing sea, we uncover the dark side of passion. Nicolas Roeg’s 1971 cult classic Walkabout and Lina Wertm 1974 box office hit concoction of steamy drama and gut-busting comedy Swept Away utilize a psychoanalytical method through the cinematic lens, chiseling away at the sexual undercurrent that poisons Western society into a shriveled, corrupted reality. 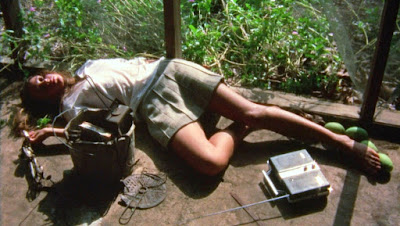 As desert animals scurry across the scorching sand and rock fixtures tower high in reach of the heavens, Walkabout takes viewers on a journey of manhood, of cultural scrutiny, and, perhaps most interestingly, sexual exploration. Roeg’s use of innuendo and subtext within the film serve as doorways into the world of sexuality and its effect upon the class structure of both Western and Aboriginal society. Throughout the course of the film, our English lass is subjected to multiple encounters with the men in her life that expose her budding body to viewers, both in scenes of nudity and, astoundingly, those in which she is fully clothed. As she embarks on her journey through the Outback in search of the civilization she has for so long desperately clung to, the young girl falls into a short-lived courtship with the film’s hero and victim, its helpless, doomed figure of divinity: the Aboriginal. Despite being pulled far away from the familiar arms of the societal constructs of the Western world she has always been so accustomed to, the English girl allows herself to be opened up by the curious mind of her indigenous savior, but only enough to highlight the inevitable, crushing reality of the daunting weight that exists between them: status.


Throughout the film, numerous examples of the sexual awakening of the adolescent mind are illustrated through Roeg’s interesting camera angles and scene cuts. As her young body gracefully slices through the water of the pond with nothing but skin to show, scenes of the Aboriginal cut in and out of frame (Roeg, 0:58). His body, strong and glistening with sweat as he hunts down his meal parallels her own, representing the path of sexual awakening the two are destined to take, but are unable to do so together as one (Dirks, para. 4). In scenes in which they stand alongside each other with that unbreakable communication barrier between them, the camera follows the English girl’s eyes as she stares at the nearly naked, glistening dark body of the Aboriginal that is so extraordinarily incomparable to hers, almost longingly, but always to turn her gaze away in refusal of her deepest, most carnal desires. This fleeting dance between these two newly awakened souls comes to a crashing halt with the girl’s ultimate rejection of the electrifying current that blazes between them. She is unable to look past the societal decree that deems him as her inferior (Dayoub, para. 4). This declaration of differences is set into stone with the Aboriginal’s apparent mating dance as he seems to mock the comfort the girl finds in her high-class position within the societal hierarchy in which she immerses herself (Roeg, 1:23). He keeps his distance as he performs, seeming to beckon to her in a silent declaration of love as she keeps her head turned away, content in the choice she has made. A walkabout sees its end as it hangs from a tree, defeated by the hands of a young girl fueled by her sexual realization that she will always have a place in the highest tier. 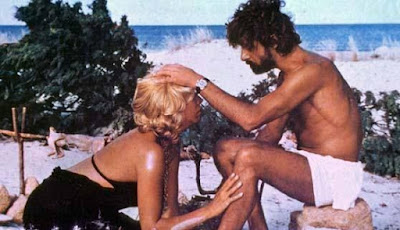 In a watery world completely separated from the dunes and pits of the scorching desert, viewers find themselves entangled together in a fiery love affair on the sands of a deserted island in the middle of the sprawling Mediterranean Sea. Raffaella, the incredibly wealthy capitalist beauty that never had the thought to launder a dirty shirt if there were others present to do it for her, comes face-to-face and up-in-arms with Gennarino, a man utterly engulfed by his communist views of the world, in a dangerous tango with sadomasochism. Lina Wertmüller’s Swept Away paints a picture of the gruesome reality that is sexual domination and its relationship to the flurry of political debate within Italy at the time of the film’s release. The grapple in which this picture’s two unbelievably contrasting characters come together in deliverance and inhabitance is perfectly illustrated by its portrayal of Western society’s obsession with the mixing of sex and subjugation. Viewers are enlightened to cinema’s ability to showcase the reality of culture’s complex issues with eloquence across a sweeping spectrum and not tucked away in a black and white world of simplicity (Hoffman, para. 7). By implementing a directing style that highlights the film’s uncomfortable scenes of rape and emotional manipulation, Wertmüller creates a cinematic masterpiece that parallels abusive relationships to the struggle amongst the different rungs of the societal power ladder.


Throughout the course of their time on the island, Raffaella is constantly tried and abused, transitioning from the luxurious life of a rich man’s plaything to kissing the feet of her heart and body’s ruthless captor: Gennarino. As this simple manservant thoroughly indulges in all the pleasures that life has to offer – the mind and body of a beautiful, love-struck woman, the salty air rising up out of an endless sea, and the privacy to enjoy it all – he serves as the classic age-old example of the close-minded, egocentric Neanderthal husband, always seeking to dominate anything and everything within his grasp. Gennarino exerts his authority over his lover on numerous occasions, and the transfer of power is obvious as Raffaella, whose formal lifestyle demanded nothing else from her save her beauty and passive presence, submits to his every command without question, enduring slaps to the face and verbal abuse. In the film’s most intense and disturbing scene, the two wriggle in the sand with limbs flailing as Gennarino forces his manhood upon Raffaella, accusing her of being at the root of the country’s economic and political problems, and she is left to spiral downward in a complete loss of control (Wertmüller, 1:09). Wertmüller’s cinematic decision to include such controversial material in her film represents political retaliation and revolt, effectively bringing to the surface relevant issues of Italian society and presenting them to viewers in a memorable and entertaining way (Lovell, para. 4).


Outraged by this portrayal of an independent, worldly woman as an inferior to a man and the inclusion of outwardly sexist and misogynistic subject matter, feminists question the director’s relationship to the woman’s rights cause. Wertmüller’s violent scenes of abuse and manipulation serve not as derogatory stabs at the foothold the woman’s right movement has made in society within the past few decades, but as representations of the issues that the female gender must face in daily life as well as an “allegorical equivalent for failed revolt” in terms of political distribution of power (Lovell, para. 5). Her characters are left to roll in the sand, scrambling for that which they have lost and so desperately desire, all of which is representative of the failures that result from both sexual and political domination. With this film, the negative light that is shed upon women such as Raffaella is not a symbol of inhibition, but an indication of forward movement and progression within a corrupted, subjugating culture (Solis, para. 12).


Through the eyes of a millennial, the sensitive subject matter explored by these two powerhouse films represent the decades of damage done by previous generations that lived in the shadow of ignorance all their lives. Young people are forced to ask themselves the question: if it were up to me, how would I repair the broken heart of the world? Walkabout, despite the hard façade the English girl wears as a mask to shield herself away from the danger she sees lurking in the world of the Aboriginals, tells a story of the innocence of adolescence and the curiosity that grows from a young, maturing body and mind. In Swept Away, behind the violent exterior of a ruthlessly possessive domination, viewers are left to only wonder about the burning flames of passion that burn hot and surely through the veins of our two stranded lovers. Nicolas Roeg and Lina Wertmüller hide behind a wall of societal and political cries for help, built high and separating the world from the joy of healthy, enriching sexual love. They demand the world dig deeper within itself, seeking healing through the skin of those closest to the soul, in order to truly live in love and happiness. In his “Song of the Open Road,” Walt Whitman writes: “Camerado, I give you my hand! / I give you my love more precious than money,” beautifully emphasizing the importance of love above all that may bring the heart pain (sec. 15, lines 8-9). Whether we find peace in the desert, basking beneath the warmth of the sun’s rays or facing the endless sea as salty water kisses our skin, we must realize that while sex holds within its tightly clenched fist the power to overthrow, manipulate, and destroy, it is also the foundation for a world painted bright with the color of love. 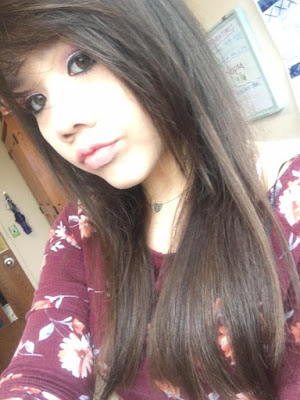 
Dirks, Tim. "History of Sex in Cinema: The Greatest and Most Influential Sexual Films and


Lovell, John P. "Lina Wertmuller's Use of Sexual Violence as Metaphor for Political

Posted by Taking Giant Steps Press at 4:35 AM