Kirpal Gordon:  “Songs-Voices-Poems” is big fun and a great use of radio in our screen-obsessed culture. It also suggests, as opera loving Ezra Pound said, “Lyrics and music are one, not two.” What led to the creation of the show?
Jackie Henrion: Most things I do tend to start with curiosity. In the spring of 2014 I saw that the local public radio station was starting a training program and I was curious about the station. I knew many of the people there already and when I went to the initial session I liked the community.  It was diverse in the same way my hometown of was.
I had been a strange, Suzuki Bean kind of kid growing up on . I memorized Poe's “Annabelle Lee” as a small child and I remember the look on my parents’ faces when I recited it to them. They asked why that poem, and I said I just liked the sound. It was not uncommon for my parents to have readings and art happenings in their living room by poets such as Howard Hart and Bob Nichols and I devoured Lear's Limericks and the Golden Books of Poetry and the beautiful graphically illustrated Illiad and Oddysey. While trained in classical music, I was also drawn to the lyrics of folk songs such as Peter Paul and Mary's “The Great Mandella,” which was the first song I ever learned to play. I also was fascinated by French songs, playing and translating Le Deserteur for my Junior High School French class.
So after the training at the station about FCC regulations and how to operate the equipment, which wasn't any different than the equipment I had used for my folk song production and performances since 1995, I shared my thoughts about a show. I submitted a proposal and sample show. The one comment I received was that I needed to put more of myself into the show. So I started to think more deeply about song lyrics and how the best lyrics were crafted like poems. The title went from "Poems With Wings" to the broader (and less cute) title of “Songs-Voices-Poems.”


Kirpal Gordon: I noticed that each show is different. How do you decide what to feature?
Jackie Henrion: Each week I think of a theme for the show. I just keep my mind open for a subject that has caught my attention, or something I've been studying, a news event, local happenings in Sandpoint, Idaho, or people I interact with who are still in NYC. Perhaps the group of writers I meet with each week, where we do extemporaneous, timed writings and readings, has given me the confidence that every moment in life contains a myriad of creative possibilities. Like said, I dwell in possibility. Then I research our extensive radio library for illustrative songs. I then use the incredible resources available on the internet such as poetry.org, UPenn's sound recordings and others for relevant poems. For the poetry, I reach out to the authors to request permission to use material on the show. As a result, I have corresponded with all kinds of poets from Charles Bernstein, Lawrence Ferlinghetti, Amy King, to Mark Toby. I also have corresponded with the , the Y and the Nuyorican Poets Cafe for audio permissions. You see, our public radio license only covers music available through standard commercial copyright channels.
I spend 15 to 20 hours to create a rough script for the show that weaves relevant information cohesively. I like to write the script early in the week, so as the week progresses, I can edit it to a more relaxed, less stentorian, less pedagogical tone. Then I go to the station every Sunday evening and do the show live after checking the song lists, uploading and sound-adjusting any spoken verse. We don't have separate engineers, so I run the boards during the broadcast which goes from to . I like the challenge of radio to make something entertaining yet interesting and informative and perhaps even inspirational.
Kirpal Gordon: Say more about what you mean by inspirational.
Jackie Henrion: I mean that it might inspire the audience to think of things differently. One of the characteristics I value most about poetry is the presentation of a different perspective. Many people don't get the opportunity to become aware that their own personal reality is an illusion. Some come to that awareness through inebriants or even psychotropics.  Me, I find a little sleep deprivation helps to realize how we create reality and have a kind of double torus rotation of energy that is constantly testing outside reality and altering internal beliefs accordingly, as well as the even more potent reverse: Our beliefs alter reality.  With that in mind, I appreciate the challenge of modern poetry to co-create meaning.

Kirpal Gordon: Some critics have suggested that songs and poems are different genres entirely and a good poem and a good song are not comparable.
Jackie Henrion: I've tried to drop the words "good" and "bad" from my lexicon. I am drawn to the concepts of spectra, wave form distributions and Venn diagrams, even as I acknowledge the possibility of platonic beauty and truth. It's a paradox I embrace. This is getting pretty headsy, but much of our cultural discussion takes the form of dialectic, logic, either/or propositions. Those who study and absorb these propositions value that approach. It has the appearance of intelligence. But what I try to do on my show is to illustrate that shared characteristics improve both. Well crafted song lyrics are as potent as any poem and most poems call on a sense of music or sometimes visual arts to engage. My perspective is that commercial pressures to appeal to the broadest population results in pop products. If I were to avoid the use of the term 'bad', I would say that pop lies on the opposite side of the spectrum of creative, expressive arts. But at any moment, an artist may choose any point on the infinitely variable spectrum to suit their needs.
An example of a songwriter who has used the craft of poetry extensively is Dar Williams in her song :

Well I had everything,


I gave it up for the shoulder of your driveway


And the words I'd never felt.


And so for you I've come this far


Ten miles above the limit and with no seatbelt


For tonight I went running


Through the screen door of discretion


As I woke up from a nightmare


That I could not bear to see;


You were wandering out on the fields of


And you were not thinking of me...

I've talked with Dar about her process and she is very much into the conversation between fine arts, poetry, internal philosophy and her songs.
Kirpal Gordon: No question—the wide commercial appeal impulse, often at odds with what makes the work art, can dumb down the authenticity of a lyric and weaken its power of witness. Perhaps in a more niche-driven market, there may be less need to sell millions of copies and more need to build community. Which leads me back to the radio show, which certainly appeals to a niche audience yet is available to millions of listeners. I like the use of the word "Voices" in your title. Say more about that.
Jackie Henrion: Actually in the development of the show title, I considered 'songs versus poems' in a didactic sense. A sound tease went through my mind to pronounce it like the native New Yorker I am, and then realized it sounded like 'voices.' I realized that title gave me a chance to discuss voices both physically and metaphorically. Since I've studied with numerous vocal coaches, I felt that it enabled me to explore the keening quality produced in women's voices like Souad Massi's "Raoui" to Joanne Shanendaoah's Native American chants to Enya's Celtic stylings, to Baltic throat singers. In my studies I have learned that, in Ancient Greece, women were banned from keening at funerals because it would diminish the capability to raise armies. Metaphorically, the possible discussion of the uniqueness of one's voice is crucial to discovering how our language is so populated by short-cuts, that we don't pay attention to our choice of words.
Kirpal Gordon: Are there any podcasts of the shows that folks can hear?
Jackie Henrion: Unfortunately, no. At this point the format of my show includes material restricted by copyright laws. While our public radio station pays a certain minimal amount which we hope finds its way to the rights holders, we do not have rights to re-podcast the material. For now I like the fact that what I do is ephemeral, kind of like performance art. But, like the old days, you can hear the show on KRFY 88.5 fm or via Internet stream every Sunday at pacific. It can also be picked up by going to KRFY.org "live streaming" or Tune-In radio. But someday I may chose to focus my energy on using my scripts and song lists to create a published work. 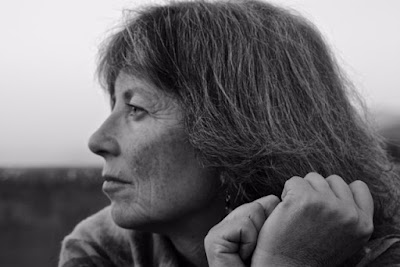 Kirpal Gordon: I remember hearing you sing and play guitar in a folk music context that I found refreshing and innovative. How has hosting “Songs-Voices-Poems” affected your own work?

Kirpal Gordon: Stein and Zukofsky! I got my first real taste of both writers while studying at Naropa’s Jack Kerouac School of Disembodied Poetics.


Jackie Henrion: Interesting, perhaps a peek of unified field. Because I will be applying to Naropa's low residency in Creative Writing for the fall of 2016. And the reason was partially because I read the Giant Steps Press interview of David Cope describing his experience with Alan Ginsberg at Naropa. I was drawn to the humanness of his remembrances and the honoring of artistry which passes from a teacher to a student. I checked into the writings of the Naropa professors and I have particular projects that would benefit from exposure to their guidance. In addition, I am really excited about the integration of contemplative philosophies within the curriculum. I've practiced Vipassana meditation for many years and it has colored my work. When I met you over 10 years ago, I felt that "field" from you and a respect for your focus and energy.  I appreciate the time you have allocated to do this interview.
Kirpal Gordon: Likewise, Jackie! A unified field! Well said! Grazie.

Posted by Taking Giant Steps Press at 5:32 AM