“A Time When Bushmen Could Choose” by Isabelle Jensen

When referencing the past, many people think of it as simpler times and become nostalgic. For the Bushmen or San people, their past is a time of less oppression and more happiness. The San have lived in southern Africa for thousands of years and are one of the longest lasting cultures. Modern-day civilization has changed their lives, from the traditional society that lacked objects to forced modern living. In the comic mockumentary film, The Gods Must Be Crazy, the Bushmen tribe was entirely separated from the rest of the country. Although they are called Bushmen, in general they prefer to be called the San so for this essay they will be referred to as such. The San people had not seen white people or anyone not in their tribe. They had no man-made tools, only what nature had given them. They had no concept of being materialistic. Everything in the tribe is shared within their kind, peaceful social community. The movie focuses on the tribe of San that live in Botswana. The movie was released in 1980 before the Botswanan government began its removal of the San people. The main San, Xi, was lucky enough to be able to keep his culture, but in the years since then, it has become harder and harder for San to keep their lives and traditions due to government intervention and their removal from their land.


In the film, a pilot threw a Coke bottle out of the sky and it fell into the deserts of Botswana. The San found it, thinking it was a gift from the gods. They had never seen anything like it and found many ways to use this new object: to cure thongs and snakeskin, make music, and make labor easier (Uys 0:08). This was the first time they had an object they could not reproduce and still needed. Greed infiltrated the tribe. “Anger, jealousy, hate, and violence,” emotions they had never felt before, were suddenly abundant (Uys 0:10). Xi was angry with the gods and blamed them for creating issues and chaos within his tribe.  He looked toward the sky and shouted “Take back your thing! We don’t want it!” (Uys 0:12). He threw it into the sky but it just came back down. It hit his daughter in the head causing even more disturbance. Xi buried it to try to keep it away from his tribe who felt shame for having acted poorly. It was found again by some of the children of the tribe. Upset that the “Evil Thing” had reappeared in their lives, the tribe discussed what to do. Xi decided it did not belong on the earth. He was to walk to the “end of the earth and throw it off” (Uys 0:14). He was incredibly dedicated to saving his people from an object that created such negative outcomes.


Xi made the choice to get rid of something that could help him just because of its emotional effect. In western society, anything that can make things easier or more fun is valued no matter what it does to our emotional health. We let objects become important despite the fact that they disturb our reality. Even if we do not fully accept the change, we do not walk miles to stop it from happening. For example, there are lots of social media apps that make many people feel terrible about themselves, but they keep using them just the same. The purity of the San culture helps them recognize what is truly hurting them. Xi had the ability to save his people from the outside world. 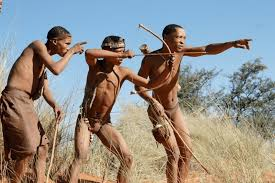 Xi goes on a journey in which he meets a lot of people and sees parts of the modern world. He meets whites for the first time, and he thinks they are gods (Uys 0:55). He tries to give them the bottle, but the white people have no idea what is going on so they do not take it. The one non-San who spoke San told him to “throw it away yourself” (Uys 0:58). Xi has many adventures such as learning to drive and helping save the children from terrorists. He meets many people who are kind to him and have advanced tools. After disposing of the bottle, he goes back to his tribe. He does not try to bring back any of the new things he saw. He values his culture and chooses it over western society. Unfortunately, in modern times, not all San are so lucky to have a choice.


In 1961, the San of Botswana were given a reserve to live on called the Central Kalahari Game Reserve (CRS 2). It was made to protect the San way of life. Then in 1978 the government launched the Remote Area Dwellers Program which provided water and social services to the San and created new settlements (CRS 2). The San people were given some help but were mostly able to keep their culture intact. When Jamie Uys made the movie in 1980, the San had their own land and some help when they needed it. The San were supported by the government and did not have to change their lives for western society. However, this “protection” did not last long.


In 1982, diamonds were found on the Central Kalahari Game Reserve (CKGR) (CRS 2). This was the first indicator of a mass relocation. Many San were told to leave the place their family had been in for generations due to the diamond mines (Survival International). The Botswana government named New Xade as a new place for the San people to live in (“Chronology for San Bushmen in Botswana”). It was a permanent settlement in which the government heavily encouraged the San to lead a “settled life by building schools, clinics, and providing potable water” (“Chronology for San Bushmen in Botswana”). The lack of edible plants and a hunting ban made it almost impossible for San people to continue their lifestyle (Tarvainen). The Botswana government also gave those that moved some money and cows to encourage settling (Tarvainen). The government decided diamonds were more important than culture. They chose greed but the San did not get a choice.


The removal happened fairly quickly but forcefully. By 1997, 1,739 San had been relocated to New Xade (CRS 2).  In 2001, 689 San lived in the Reserve and in 2002 only 17 San did (CRS 3). However, more than 200 San snuck back onto the reserve in 2002.  The government argued that the removal was necessary to protect the land and that they have the San’s best interests in mind (CRS 3). There are claims of armed police and threats of violence to clear the settlements (Blair). Police officers who came to remove the San people told them to “leave as volunteers” and those who did not leave the police would “end up killing” them (Blair). Government agents would also threaten arson (CRS 3). The Botswana government maintains that it has not “employed force, coercion, or threats during its relocation of the San” (CRS 3).  They claim to be helping the San people to develop “socio-economic practices of the larger contemporary society” (CRS 3). In reality, this translates to trying to erase the culture of the San. According to the government, many of the San are no longer traditional anyway and use guns and cars to hunt but there is no evidence of this at any frequency on the reserve (CRS 3). A law was passed that made it illegal to hunt without a permit but the government refused to issue permits to San people making it impossible to live their traditional lives (Survival International). More than 50 San were arrested for hunting to feed their families (Survival International). The San people took it to the courts. The high courts ruled that it was unconstitutional to remove the San from their land and to require hunting permits but nothing has been done to enforce this ruling (Survival International). The Botswana government wants to look like they are helping but they are not. They will find any excuse to profit of the San’s land and will try to save their image in the process. They would rather discredit the San than admit what they are doing.


Forcing the San people to lead different lives has not gone well. The San refer to New Xade the “Place of Death” (CRS 4). In New Xade, there are incredibly high rates of alcoholism, unemployment, crime, and HIV/AIDS (CRS 4). Botswana gave the San people cows in the hope they would settle but never taught them how to take care of them. The cows got sick and no one in New Xade knew how to keep them healthy (Fihlani). Many San people have gone back to the reserve despite the government’s strong push against it. In 2002, the government sealed all San water storage structures in the CKGR and banned NGOs from giving food or water to San on the reserve (CRS 4). Most San people just want to go back to their old life just like Xi did.


Modern-day San cannot return to their old life the same way Xi did. Just like him, they were unhappy with western influence but had nowhere to run safely back to. Xi saw the world and went back to his culture and his people. Many San people are trying to do the same thing but the diamond mines, destruction of water storage, and arrests stop them. Unfortunately, the more time passes, the more cultures are destroyed and corrupted by modern society. The real-life story is the extreme of the movie. The bottle in the movie ruined the peace of the community but diamonds and greed in real life destroyed the community entirely. Compared to modern-day San people, Xi and his tribe were lucky. Xi had a home to go back to instead of being forced to live a life he did not want. Those forced to live in a modern way are now suffering from disease, addiction, and joblessness. In the “Price of Happiness is Actually Free,” Brendan Kaston explains that Xi’s choice to return home was about the progress of the modern world versus happiness of his tribe (Kaston). Xi chose happiness. Since the mid-80s, the San have not had a choice. For them, going to the modern world is not progress. The San cannot adjust to settling and the new world they face so they make no progress and only have difficulty.


The San people deserve to have their own choice between modern and traditional. A life or progress or a life of happiness is the choice they must make. Forcing people into one way of life just to profit from the diamonds is selfish and detrimental to the San. Xi was lucky that no one tried to change him or keep him away from his culture. He could go back to a less stressful life of fewer problems and less progress. His choice is what most San would do if they could. The struggles that San people have gone through since the movie was made are unlike anything Xi and his tribe could have imagined. His choice was not life or death unlike the choices of today. Like Xi, the San could go back but they risk arrest. The time period before the diamonds was an easier time for the Sans people. The greed of modern society and a money-hungry government made their lives incredibly difficult. The San could not choose and could not escape it. The greed of the government forced them into a life they did not want. Xi could choose, unlike many others. He saw the greed and could escape it. The San after the movie were not so lucky. 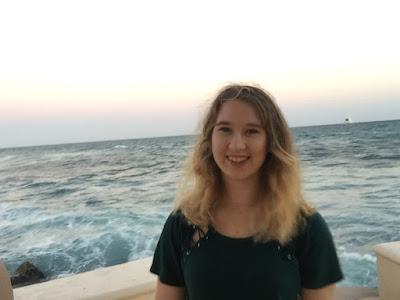 
Blair, David. “Bushmen Forced out of Desert after Living off Land for Thousands of

Kaston, Brendan. “The Price of Happiness Is Actually Free by Brendan Kaston.” The

Posted by Taking Giant Steps Press at 4:23 AM