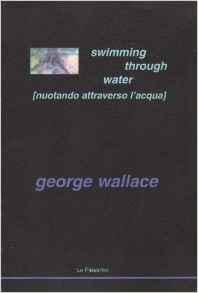 JONATHAN PENTON: I love the variety on this CD. It's one of those discs with a consistent, unifying set of themes, but huge deviances from track to track. There's a wide variety of instrumentation, and the flute on "When I Am Old," a track featuring George Wallace reading the poem of David Ignatow, is particularly haunting, striking the right balance between kind and creepy that's essential for such a theme. This track is in contrast, stylistically, to the jazziness of "Contest of the Electric Flowercars," but there's still a steady stream of sensibility and aesthetics that gives the disc a clear focus.

KIRPAL GORDON: One reason for the range is George Wallace's command of his craft. It's all there in his warm baritone voice, his musician's sense of time, his surrealist leaps and his emphatic understatements. Like Willie Nelson, you can hear the nicks and crannies of his whole life in his phrasing: he's not hiding anything. He's also quite adept at employing an opening phrase or line that repeats throughout the poem. Sure, that's a trope that many in the Whitman lineage use, but he "makes it new" and with startling results.

The other big reason it's steady and clear yet varied in instrumentation is David Amram on piano, tabla and various flutes. He's been around a few blocks as a player, conductor and composer, investigating and synthesizing musical traditions long before the term World Beat came into coinage. I've seen him play flutes from to and there's no mood he can't evoke. Like so many jazz folks of his generation, he knows how not to get in the way of the words, whether sung or spoken. That's de rigueur for those old cats who came up in big bands that accommodated vocalists for part of the set. Amram started his career on French horn---a majestic, warm and round sound---so you know he knows when to hold and when to fold 'em. He's got that haunting Navajo-like flute in the poem you mentioned for David Ignatow: spooky, arresting, long-toned. Wallace’s last line---"I will ask for red roses, in remembrance of the first loss"---locates the balance you’re talking about between fear of aging and joy of celebrating. Once again, the poem really finds its home in the melody. It's much more moving than when simply read to oneself. Along this line, check out the sixth track, "The Wave," because Amram really plays inside this haunted beauty of a poem. It's only a minute and a half long, but it's magical proof of how music and lyric are one fabric, just like ol' Ez told us. Moreover, it's up to the task of revealing how "great wardrobes of light drape the ancients, dark mending waters after all."


JONATHAN PENTON: It's real clear that Amram gets what Wallace is trying to do with the poetry. The poems and instrumentation are deeply integrated and highly complimentary; the themes and issues are congruent throughout. And what themes and issues! These are extremely original poems, tackling the quotidian from the most remarkable directions. Consider the opening lines of the second track: "God makes a note to himself / things to permit to occur without interruption." Or that track you mentioned, "The Wave," with its brilliant and moody imagery. What we've got here is a true affection for life in all its parameters, revealed by an absolutely expert pen, delighting in its own words and what those words signify. This is an extremely sophisticated and beautiful book, and Amram gives it additional power in a way that only someone who really "gets it" can.

KIRPAL GORDON: You've nailed it and this is the toughest thing of all, that the whole is larger than the sum of its parts. No question, that second track is a gem and truly written in heaven. Here are some typical lines and notice how smartly he spaces his syllables while Amram plays a thoughtful, spacious chord progression on piano underneath: "a bird in flight a child in prayer oceanspray windsong/ the progress of the sun through day" or "old men shaking hands with each other / death cheated vengeance denied / hope luck second chances / good advice freely offered / headlights on an empty road / the reappearance of fireflies in july" and that killer last line that would make a James Wright fan smile: "any soldier who desires to lay down his weapon / and turn his face in the direction of home." By the way, did you know that Wallace, a former reporter for The Long Islander, a newspaper founded by Walt Whitman in 1839, is also a former poet laureate of ? So that last line really packs a political punch which, to my ear is as inseparable as the music of Amram to the poetry.

For a favorite track, I vote for the title piece, the first track on the CD, "Swimming Through Water," which, by the way, is also the title of Wallace's poetry collection, published by La Finestra Press of , in English and with Italian translations by Anny Ballardini who also interviews Wallace at the back of the book. Amram has great reach on the piano and in this song he reminds me of Edgar Meyer-Yo Yo Ma-Mark O'Connor's collaborative evocation of . Amram blends these pianistic kernels of and the a la the Gershwin of "Porgy and Bess" and mixes in a quiet, Impressionist reach of "Rhapsody in Blue." He sprinkles these clusters to great effect in and around Wallace's well timed and repeating phrase, "some folks." The piano water-dances through rain pools, and if you check the track against the printed version you will see how much improvising with the text Wallace is doing as well. It hangs so smartly together and it's got lyrical wings!


This conversation originally appeared in a slightly different form in Unlikely Stories.

Posted by Taking Giant Steps Press at 5:54 AM