Round Earth, Open Sky: Available on the Autumnal Equinox 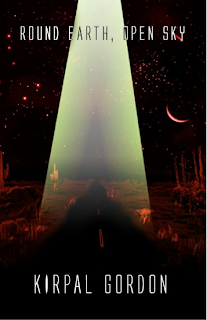 Available to peruse or to purchase for $14.95 at KirpalG.com and at Amazon.com, Round Earth, Open Sky is a psychological suspense thriller and Native American sci-fi road novel that doubles as an inquiry into the nature of human identity.

During a mid-summer observance, Sky Man, an immortal, tricked by human sorcery, falls out of the sky and accidentally into a dead human out in the Sonoran desert. Seeking the location of the hole-in-the-sky ceremony so he can return to his sky people, he stumbles upon a boxcar family and more of the dead human he inhabits comes to light. When he finds a road, a car pulls up, and everywhere the driver takes him, more clues are revealed.

Stops in the Hopi and Navaho Nations, Oak Creek Canyon, Detroit, Ontario and the Ojibwe Nation unfold different threads of the dead man’s identity, but the evidence contradicts, requiring Sky Man to call his host back from the dead before he can make his ascent to his sky people.


"Part mystical vision, part cosmic joke, Round Earth, Open Sky is Kirpal Gordon at the top of his game, by turns lyrical and ironic, magical and subversive, moving past the vanishing point where Jack Kerouac meets Carlos Castaneda. Gordon is a consummate postmodern trickster, wanting nothing more than “to stir a little gray into the either/or, black-and-white world,” leading us to laugh at what we think we know, and to humble ourselves to a world that will always be much larger than we can imagine."
--- Stephen-Paul Martin, author, Changing the Subject


"In Round Earth, Open Sky, Kirpal Gordon flirts with the borders of fantasy and science fiction to create a novel whose heightened reality entertains and illuminates simultaneously. When Sky Man, its protagonist, literally falls to earth from a plane of existence beyond it, Moses becomes the first of many colorful and complex characters to try to determine what he is and whether his true nature lies in the heavens, the earth, or both. The path to the answer untangles many tangled relationships, past and present, in a highly entertaining journey that will keep your eyes glued to the page and your fingers eager to turn it."
---Vernon Frazer, author, Improvisations


"In the middle of nowhere, a photographer gives a lift to a mysterious stranger and finds himself the passenger on a surprising, and sometimes sinister, journey toward discovery and self-revelation that carries them both through the perils of obscure Native American tribal rites to the portals of metempsychosis and the magical reality behind “reality” which erases past and present and, at the same time, recreates them. In Round Earth, Open Sky Kirpal Gordon unrolls a map that irresistibly lures its characters, and the reader, toward a spectacular life- and death-transforming climax."
---Eric Basso, author, The Golem Triptych